Juan and Grace joined me in Civic Center Park yesterday for the Barack Obama rally.

I wasn’t sure I wanted to go, but when Juan pinged me to ask if I was going, I figured why not. I walked down to 16th st and took the mall ride to Civic Center park.

I was there by 10am. Found the (long) line, and headed towards it. At the end of the line, was a volunteer telling people that we needed to go to the other line, that was running down Colfax and around Bannock. I merged in with that line, which was moving, surprisingly. We wind into the park, and abrutly hit a volunteer telling us that our line wasn’t going anywhere. Imagine a stream of water hitting a wall. That was us.

I met up with Juan and Grace on my way to the end of the line (again). The line went down Bannock, to 12th, then headed toward Lincoln (I think it was) and headed north again. It ended just about where it began, near the park. There was a nice volunteer waiting at the end to tell people, that those at the end, wouldn’t likely get in to the rally.

We headed back into the park, figuring we’d at least hear Obama even if we couldn’t see him. Then suddenly, some of the gates opened up and we found ourselves quite a bit farther into the park, yippee!

Once we suffered through the usual politico-speak from congressmen and senators seeing who could use the most metaphors, Obama came out, a little after noon. The above clip, is a short bit of Obama’s speach. It was very very good.

Oh and all those folks in the video, according to the Huffington Post, there were 100,000 people at the rally. The filled the park, overflowed up the steps of the capital. It was amazing. 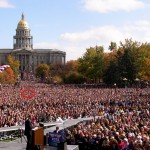 Somewhere around the red oval, that

Despite the frustrations of getting in, I’m glad I made it down to the park. Hearing Obama speak was very powerful, and moving. While I hope this isn’t the case, i’m guessing, once he’s Prez rally’s will be much harder to attend.