You are here: Home / Random / Thanksgiving in the mountains 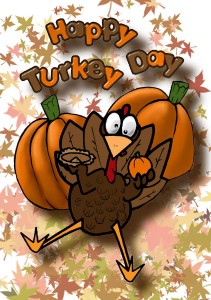 Nicole and aren’t really Thanksgivng people. In CA we’d go for all you can eay Sushi (usually the only white folks in the place), but in CO that’s a bit tougher. We still try to get sushi, even if it’s not all you can eat.

This year we headed up into the mountains, for a little time away from the city. That sounds overly romantic, like we headed off to some small log cabin with no utilities. Actuall we went to Breckenridge to a condo at the base of Peak 9, with Wifi (it sucked, thank god for EVDO), and a kitchenette.

We didn’t get Sushi, since Mountain Flying Fish wasn’t opened, but we did enjoy an incredibly tasty meal at Blue River Bistro. Get the Creme Brulee!

Who woulda guessed that there’d be so little snow? Last year the resorts were screaming bloody murder about the lack of snow, so we all knew what was up. I guess this year they decided to keep their traps closed. There was 1 run open at Peak 9, a few on peak 8. The entire town of Breck was snow free on Wednesday and Thursday.

Finally Friday saw some awesome snow. We woke to it coming down, and it continued to fall all day, making the runs AWESOME, blessing and curse, that.

We got some good runs in, but man, PEOPLE SUCK. I know I’m not the only person on the mountain, but really folks, you aren’t either.

We did pick up some cool gifts for folks for Christmas, so that was cool and did enjoy yummy food. All in all the bar for Thanksgiving has been raised for us now!

That said, we’re not hitting the slopes in November anymore. Not worth it.

Want to see me live and in person? I'm very personable and some say … END_OF_DOCUMENT_TOKEN_TO_BE_REPLACED