You are here: Home / 360Conferences / Happy Festivus to one and all!

I just wanted to take a moment to reflect on 2008. It’s been a great year with lots of twists and turns.

2008 was the first full year of 360|Conferences, and saw us visit; Atlanta, Milan Italy, and return to San Jose CA, where it all started for 360|Flex. It also saw us start to make some money, enough that we paid ourselves a little money, not a salary, but we’re able to show a bit of income for our efforts, which in a start up never hurts! Lastly, 2008 saw us announce our first non Flex event, 360|iDev, the first and largest iPhone developer conference.

I moved from being a Flex  developer consultant, working for some really great companies like Universal Mind, and Esria, to being the Community Evangelist/Solution Engineer for EffectiveUI. I love writing code, and still do, albeit not daily, and I’m trying to learn to write some iPhoneSDK code as well, but there’s something about helping EUI get more out of social media and community. I’ve learned a lot in a short period, and can’t wait to see how ’09 treats me. 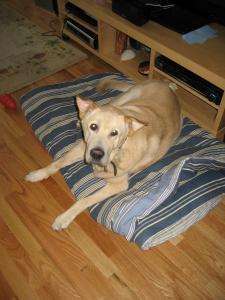 2008 was also the year we lost Terrance :( He was 10, I’ve lost a few animals over the course of my life; Chip, Mandy, Hamster Little Tike, Turtle Duke, Rat Eon. The dogs were family pets, and the others I was pretty young, I guess it never sunk in back then.  Terrance hit really hard, I had had him and his brother Philip since they were about 8 weeks old. Losing him so suddenly really hurt.

2008 was our first year in our new house in downtown Denver, w00t! We left Highlands Ranch in December ’07 leaving behind moms in SUVs with nothing to do all day, starbucks on every corner, and more kids than I’ve ever seen in my life! We love it in Denver, if you can’t tell! We’ve enjoyed meeting our neighbors, and exploring our new neighborhood.

I also joined Jeff as co-host of The Flex Show, in 2008, and we just recorded my 1 year anniversary episode. I can’t believe it’s been a year! It’s been awesome, and I can’t wait to spend another year, helping Jeff to deliver the best source of news and interviews in the Flex Community!

Thanks to 360|Conferences, 2008 is also my first year in any type of frequent flier program. I’m finally Ascent level on Frontier Airlines. Granted they’ve been sucking more and more as an airline, and may not exist for all of ’09, but hey, for the time being, I get on the plane first, and get my bags faster, can’t beat that.

2008 also (in December, but still) saw Tom and I launch OurStartupStory, where we’ll be talking about our views and experiences with 360|Conferences. We’ve got some great guys writing with us, so it should be a wealth of view points, definitely something to keep an eye on. (as if I need a new blog to write for, but oh well!)

Want to see me live and in person? I'm very personable and some say … END_OF_DOCUMENT_TOKEN_TO_BE_REPLACED