You are here: Home / politics / How would I change education?

What happens when you have a bunch of United Air miles that are about to expire, but aren’t enough to use for anything? They offer you magazine subscriptions, lots of them. One of mine was Time. The latest issue, had an 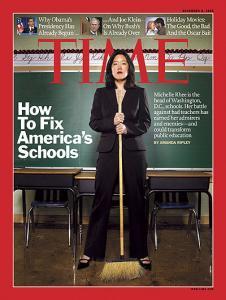 article that really struck a nerve with me, it was on education, specifically the Chancellor of the Washington D.C. school district.

As a product of public education, I’m 100% opposed to private schools and vouchers. I’m more opposed to our current school system, which I think needs to be completely scrapped. Not just a little, but scrapped and started over, get rid of the teachers, the principles, the assistant principles, and even some of the guidence counselors (though that’s just cuz I think they’re lame).

One of my biggest beef’s with my pals the democrats, their allegiance to teacher’s unions. They’re as bad the auto makers unions, and unfortunately for us, they’re mess ups, are children, not just crappy cars.

Teaching is one of those jobs, where all you have to do is make it 10 years, or 15 years, and you’re set. You can suck as much as you like after you’re earned tenure. Man I wish I had that deal, so my job well enough to not get fired for a while, then coast until retirement. SURE not every teacher is that way, a great many are heroes in the truest sense, and have my undying respect, but easily as many, are terrible. I’m not being over dramatic, I’ve suffered through them, their not really caring about the students, or the curriculum, simply fullfilling the lesson plan requirements, whether we learned something or not.

What should we do? Make teachers live in the same world we do. If I start sucking at my job, EUI will fire me. If I’ve worked there for 10 years, they’ll still let me go if I start to do a poor job. Why should a teacher be any different? Why should we give them that break that gives them the freedom to stink it up?

My idea? It’s easy, make teaching pay what it’s worth in the market like any other job, and make it no more guaranteed than any other. Teachers should be paid what they’re worth, and fired when they stink, it’s really that simple. We shouldn’t promote poor teachers to principle, and poor principles to super-intendant. Sure every industry has it’s share of “promoted to highest level of incompetence” but teaching seems to have institutionalized the concept, and codified it into their very fiber.

This quote is awesome,

She says things most superintendents would not. “The thing that kills me about education is that it’s so touchy-feely,” she tells me one afternoon in her office. Then she raises her chin and does what I come to recognize as her standard imitation of people she doesn’t respect. Sometimes she uses this voice to imitate teachers; other times, politicians or parents. Never students. “People say, ‘Well, you know, test scores don’t take into account creativity and the love of learning,'” she says with a drippy, grating voice, lowering her eyelids halfway. Then she snaps back to herself. “I’m like, ‘You know what? I don’t give a crap.’ Don’t get me wrong. Creativity is good and whatever. But if the children don’t know how to read, I don’t care how creative you are. You’re not doing your job.”

The data back up Rhee’s obsession with teaching. If two average 8-year-olds are assigned to different teachers, one who is strong and one who is weak, the children’s lives can diverge in just a few years, according to research pioneered by Eric Hanushek at Stanford. The child with the effective teacher, the kind who ranks among the top 15% of all teachers, will be scoring well above grade level on standardized tests by the time she is 11. The other child will be a year and a half below grade level–and by then it will take a teacher who works with the child after school and on weekends to undo the compounded damage. In other words, the child will probably never catch up.

I can’t agree more. I came from what I consider a pretty bad district, my high school opened with not enough teachers, and an empty library. I sat on the floor for more than a month in my 70ish kid english class. Several of my classes the first year, we had to share text books. The Gym, never had showers, etc. etc. I had a history teacher, and while I thought he was nice and a cool guy, he never spoke to the class. He assigned chapters, and tests. I went to that class about once every two weeks and passed with an A, and don’t recall a damn thing! I was in an AP class that so horribly prepared me for the AP exam, that I failed miserably. What Senior AP Lit class spends the class reading a loud? Mine did.

Teachers are brave souls, and I think we treat them mostly like dirt, but I think too many of them are doing our (actually ‘your’ since Nicole and I aren’t breeders) a terrible disservice, and we as a society have empowered them to do so. We bitch and moan about the state of education, yet parents don’t get involved, we throw money at “no student left behind” which really means, “pass the dummies so they’re some one elses problem”, rather than holding students AND teachers accountable. Every job has metrics, every single one. Yet somehow teachers don’t? Test scores aren’t good metrics, blah blah blah. There MUST be a metric, and we owe it to students, and teachers a like to find it, and make it standard, and hold all parties to it. That’s it, it’s not rocket surgery, it’s not impossible.

Want to see me live and in-person? I'm very personable and some say … END_OF_DOCUMENT_TOKEN_TO_BE_REPLACED