You are here: Home / Business / Is the printed book dead?

So I got a Kindle for work, we’ve launched an effort to help developers get their articles and content up on the Kindle (to start) and make a little money. The idea being we make some money too, and help us pay ourselves salary. Wanna write for us?

OK Pitch over. So I’ve bought two books for my Kindle and even experimented with Calibre a little. The experience so far, awesome. 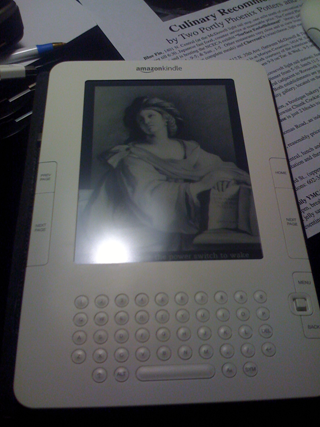 I was a skeptic, I love books. I love the feel of paper, the weight, the act of holding it in your hands, all of it. I love traveling with books and putting ticket stubs in the book. My books are like time capsules.

The Kindle changes most or all of that.

The device itself (I have the Kindle2 obviously) is lightweight, and inside it’s little leather sleeve (separate price of course) is about the size of a Moleskine, and a bit lighter. So as far a footprint, if you carry a moleskine, you’re not gonna gripe about carrying a Kindle

The screen is very readable. When we got them Toms complaint was “There’s no backlight.” I laughed and pointed out that, that was the point, books don’t have back lights either. Sure it’d be nice if it was backlit, but my books aren’t so it’s not like I’m losing some sort of functionality.

I never tried a Kindle 1 but I heard that the screen refresh was terribly slow, the Kindle 2 is fast. Probably close to about the speed that I take to reach for a page, flip and start reading. I’m very surprised by how nice the E-ink screen is. it’s very crisp and easy to read. 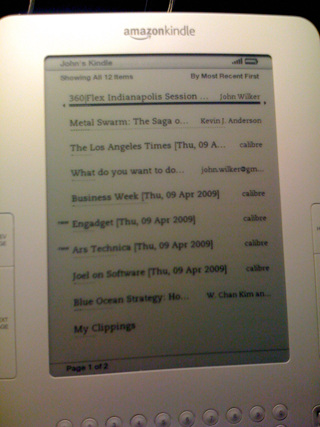 I remember reading that one of the biggest complaints of the Kindle 1 were the buttons. Taking up most of the right side of the device, making it hard to hold and not flip the page. The Kindle 2 solves that nicely. The buttons aren’t very large, but just in the right place.

I’m finding that the Kindle is much more a game changer than I gave it credit for when it was released. It’s truly the iPod of books. Screw Audible and the whole audio book thing. Sorry ya’ll, listen to music in the car or whatever, reading is for the eyes, not the ears.

It’s amazing when a company creates a product that is by no means the first of it’s kind, and even by no means the best as far as features, yet still that company and their product completely kill the competition. Apple did it with the iPod, and I’m comfortable calling the eReader space for Amazon. I know there’s a lot of complaint about the Kindle not being outside the US, etc, etc. but the same was the case for the iPod, and still is. Each iTunes store is different, but I think it’s fair to assume, where ever there’s an amazon.* domain, there’ll be a Kindle store so long as the publishing industry doesn’t act like dill holes.

I think in the very near future we’ll see Kindles as frequently as we see iPods. 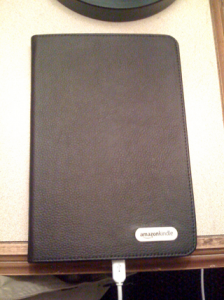 That said, it’s truly incredible that this device exists. Part of me is sad, that it spells the end (by and large) for printed books. The idea of a wall of books, ones I’ve read and need to read, lining my house just resonates with me. I’d have a real and true library in my house if there was room and money for it. It’s not. Like I said above, the printed book just feels special, and while the Kindle is awesome, it’s not a book, it’s a device and it feels like a device.

The fact that I can carry on a single device more books than I currently own (Ring any bells folks? the iPod allows the same thing with music) is a hugely mind wobbling thing. Though I wouldn’t complain if I could put content into folders, or sort by meta data or something. scrolling through thousands of titles…. no thank you.

One nice feature that makes the $300+ price tag more tolerable, is that for the most part, Kindle books are cheaper than their dead tree editions, so long run, you’re saving some money (and of course space in the house!). I do wish (AMAZON READ THIS) that there was some path where I could ‘upgrade’ books that I have purchased on Amazon as dead tree editons to Kindle editions. iTunes Plus style, there has to be a way to make that work. I’m sure part of the problem is the publishing industry, but come on!!!

My biggest complaint is the DRM. DRM sucks. It’s a terrible idea, that benefits no one, and punishes legitimate content owners. My hope both as a consumer, and now a publisher on the platform is that as more users get on board with the Kindle, Amazon follows Apple’s lead, and pushes the publishing industry (RIAA’s lost second cousin as far as fucking consumers and treating us like crap?) to wake up and drop DRM. I suspect it’s clearly working for apple, Amazon, don’t drop the ball. You’ve picked up the banner, it’s up to you now.

Join the revolution! If you’re feeling nice, click this link to buy it, kick back some coin my way to buy books :)

Want to see me live and in-person? I'm very personable and some say … END_OF_DOCUMENT_TOKEN_TO_BE_REPLACED