You are here: Home / community / WWDC from a first timers perspective

Tom and I went to WWDC to meet our 360|iDev speakers again, make new contacts, pimp the upcoming show in Denver and make some noise about InsideMobile. On those two fronts I think WWDC was a big success for us. The USB  Drive Scavenger hunt was really popular and each drive was found really fast.

From a conference attendee perspective, it’s too big, and seems to be all about Apple making us feel like we don’t matter. I’ll break my thoughts down below. 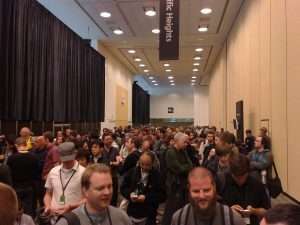 Keynote line: Tom and I got up early and waited in it. We’d never done it before so wanted to see what it was all about. We didn’t get up crazy early, but still waited outside for I think 2 hours, we were numbers 404 and 405 or something. About an hour before the keynote the line moves inside, where they’ve put out coffee and donuts and stuff. Then the line essentially breaks down into mayhem to get up the 4 escalators then mad rush into the keynote room. Why we waited in line to be ran past I don’t know. Why we waited in line when Apple could have let us get in and get seated earlier, I don’t know. Other than it’s a nice way for Apple to show everyone who’s in control.

Sessions: with 5200 people in attendance and only like 12 or so sessions at a time, do the math, each session was a mini keynote. Complete with having to wait in line to get into the room. Why wait in line? No discernible reason, other than (to me) to further make sure everyone knew it was Apple’s show we waited in line at their leisure.

Each session had at least 400-500 people, some filled to capacity, around 1500. How do you present a topic to 1500 people? just like a keynote, you talk at the crowd. Each session ended with “go see these sessions to get more info” pitches then a little Q&A where you have to go stand at a mic, ask your question, take the answer and sit down.

Content: I’ll admit, a great deal of the content was over my head. I’m still very much a novice iPhone app dev. Be that as it may, it was still very dry and very not deep. A lot of the time, sessions were slides of code, with explanations (i can read the docs myself). Every once in a while a session would get into some live coding,but that wasn’t the norm.

Oh and since each session was a mini keynote, they dimmed the lights, and kept it warm, it was WAY too easy to fall asleep, especially in the more “sales pitch” type sessions.

After Hours: WWDC is like… well I don’t know, I’ve never partied like that before that I recall. THough I barelly recall the partying I did at WWDC, so… 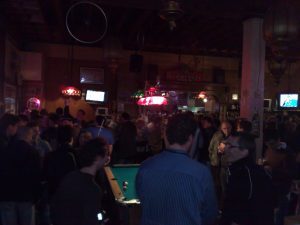 There’s at least 6 or more parties every night. Most are “invite only” or “RSVP and hope you get a ticket” deals, which sucks, and further promotes the crazy superstar nonsense that exists. Sadly most party venues are dive bars around downtown SF, so they’re crowded, noisy, did I mention crowded and noisy? The House of Sheilds is a popular place to end up. Bring a catheter and strap a bag to your calf. The bathroom (used as loosely as possible) is like stepping into the 9th level of hell, which if you’re curious is the sewer for the other 8 levels.

WWDC’s official party is a concert in the Yerba Buena park. We got there just as Cake started their encore (The Distance, w00t!) and as soon as the band finished, the tables were cleared off, the booze stations closed up, and the stage crew went to work. This was all before the folks up front had stopped jumping up and down. Very weird.

As much as I liked the parties, they were completely useless for meeting people. You ended up in a group that migrated place to place and sometimes members would come and go, but meeting new people was tough. If you were in one of the parties the music and voices were so loud, you couldn’t hardly talk.

I much prefer the 1 party to rule them all approach that Tom and I do. Sure the people who need their own party to feel special, are denied that, but hey, they can still throw a party elsewhere. Cynergy did it in Seattle. But at least you can meet people, talk, and not be running from place to place trying to catch up to the “in crowd”

Overall: WWDC is just like MAX. It’s the place to go to be seen, it’s the place where you’re assured to be in the presence of people like Wil Shipley and Brent Simmons (though, Brent will be at 360|iDev) and the rest of the luminary Mac/iPhone guys. Oh and of course Gruber, who probly will never be at one of our events.

It is the place to get new NDA goodies you can’t talk to anyone about, and of course be in the room, when a new laptop is announced.

It’s definitely the place for Apple to assert their dominance over us all, and make sure we know our place in the order of things,which is pretty low.

Want to see me live and in-person? I'm very personable and some say … END_OF_DOCUMENT_TOKEN_TO_BE_REPLACED