You are here: Home / community / My Friend wrote a book, buy it. 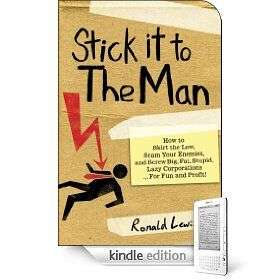 Last week I was at a book reading/signing for a new friend in Denver, Ron Lewis.

His book ‘Stick it to the Man: How to Skirt the Law, Scam Your Enemies , and Screw Big, Fat, Stupid, Lazy Corporations…for Fun and Profit!‘

launched last week, and the party was at a the Barnes & Noble downtown.

Ron is a great guy, truly interested in meeting people and doing what he can to help them succeed. When I first met Ron, I was blown away by his genuineness, he proposed we meet for coffee and was not just looking for one more person to talk about his book to. We talked about 360|Conferences, my Kindle (which I brought with him and showed him).

At the signing, he asked how the conferences were going, which was nice and further cemented my respect for him, not only did he remember my work, but showed real interest in it.

That reminds me, I need to set up coffee with Ron.

I’ve only skimmed the book a bit so far, but hearing Ron read a few passages from it, and hearing him talk about how he “landed his book deal” it was truly inspiring.

It was great to be there to support him in his (first of many, I suspect) moment in the sun.

It’s available on the Kindle store, which is a huge deal to me, so that not only can I read it where ever I want, but I won’t have to risk my signed copy getting all messed up.

It’s a great topic, and an awesome set of little things to get a leg up on companies and government trying do do the same to you.

If nothing else, buy this book to support a local (if you’re in Denver) author, it’s a good thing to do, and I’m certain Karma will smile upon you.

Want to see me live and in person? I'm very personable and some say … END_OF_DOCUMENT_TOKEN_TO_BE_REPLACED