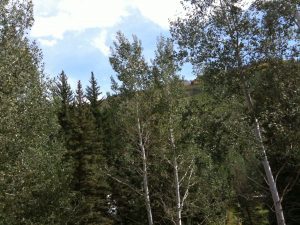 Actually it was my second, but the first time, we didn’t stop. Tom and I drove straight thru when Nicole and I moved to CO.

It was for our friend’s wedding.

Lucky for us it was also Oktoberfest in Vail, w00t! We actually didn’t endulge since we had to be coherent for the ceremony. We did buy new light jackets which was good :)

The wedding was awesome, despite the rain gods choosing to open up right as she started to walk down the aisle (Outdoor wedding of course), but we all ran inside, hung out for about 10 minutes, then did a nice take two. Worked out perfectly.

We bummed around Vail Sunday morning before leaving. Actually just a 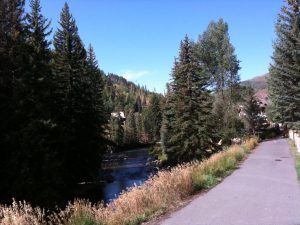 round Lionshead, which was a short walk from where we were staying.

Overall I’d love to visit Vail again, probably next summer since the skiing is a bit outside my skill level. Next time we’ll bring our bikes, I’d love to bike down some of the runs.

It was nice to get a chance for Nicole and to just hang out. Between conferences and other obligations/events around town, it’s been a while since we’ve just hung out together. Doing that in Vail, well that’s just icing.