You are here: Home / Around the Home/Office / Sprint Mifi Review 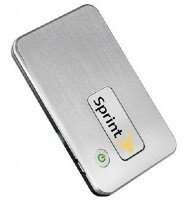 Nicole and I have had “sprint cards” for years. I used quotes, because well their fun, but mostly because “card” has been PCMCIA, ExpressPort, and USB Dongle. We both have done some traveling and even working in lame offices with stupid network rules and lockdowns, so having portable internet has been a Godsend. Nicole doesn’t travel on her own as much, we usually travel together now, or I travel alone for work, so having 2 broadband cards made little sense. Enter the Mifi.

I originally looked for a broadband hotspot I could use my extra AT&T SIM with, but alas, the only option I found was for sale overseas and shipping, and conversion to Euro’s well put it out of my price range (Still looking for a device to use that SIM in, not really a netbook guy, so don’t offer that up :D ). Luckily our sprint cards were upgradeable. Well one was. the other was free to cancel so we did.

Now we share the mifi and whomever travels gets it, and when we travel together, well we can both use it.

It’s an awesome little device. We used it this past weekend in Vail. The hotel had wifi, but hell if we could find it. Every SSID was locked, and no one provided us the password. Mifi to the rescue, power it up and bam, surfing along just fine.

As much as I’m a fan of public wifi it’s just not reliable. Either the coffee shop router is unplugged, maxed out, or “I don’t think it works” or worse, NOT FREE. So I don’t bother. Sit down, fire it up. iPhone can use it, laptop can use it, hell someone I’m sitting with can too. I don’t have to worry about the guy next to me streaming pandora, or the girl in the corner using Skype to conference call, etc. I have my own 3G connection. Sure it might not be as fast as a hardline, but it’s always available, and ready.

It’s common, if anecdotal knowledge in downtown Denver that during Rockies home games, the AT&T network pretty much collapses (sad, but true). You’ll have full bars, and can’t complete a call or open an email. I’ve taken to carrying the Mifi in my pocket or backback (as the case may be) and having it on the whole time and letting that serve up data for my iPhone. Voice is a little trickier, but Skype solves that issue, if I REALLY need to make a call right then. Sad, but hey, it’s a nice back up plan, since AT&T can’t be relied on.

Want to see me live and in-person? I'm very personable and some say … END_OF_DOCUMENT_TOKEN_TO_BE_REPLACED