You are here: Home / Business / Trade in my Kindle for a nook?

fanboy. I’ve never owned another eReader, nor thought a netbook or even notebook was a remotely viable alternative to an eReader, heck even an iPhone/iTouch, isn’t up to the job IMO. 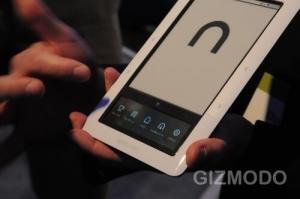 The Nook (Gizmodo Review), looks incredible. Up until now, the other eReaders, looked F-ugly, performed poorly, cost too much, etc. But B&N seems to have hit a home run. I’ll admit, I haven’t seen one in person, yet. If half the write ups are accurate though, this device has true Kindle

I’ve also made no bones about the things I think Amazon is doing wrong; DRM, proprietary format, pricing, etc. Can the Nook, counter enough of them to win me over?

The nook, certainly looks like a great alternative to the Kindle. So much so, I’m really debating my allegiance to Jeff and Co.

When measuring time in days, does 10 or 14 matter? Not to me. I charge my Kindle about every 4-5 days when I go to sleep. When I travel sometimes I don’t even charge it. 10 days or 14 makes no difference to me. SO long as I have Days, NOT hours, i’m good.

You know, i don’t care. So long as there’s broadband, I don’t care if it’s Whispernet or AT&T. Though given that I’m an iPhone owner, and know first hand how shitty AT&T’s network is, I’ll be really mad if I have to wait an hour for a book to be delivered. Wifi will be nice, when I travel overseas, but really, not that nice. I mean, I’d likely buy as many books as I planned to read, before leaving.

The big thing for me, that the Nook comes closer with its sharing feature than the Kindle… well the Kindle doesn’t even try. Fuck piracy yo! But it’s a book, it’s meant to be shared. Hell yeah I want it back! But if I think it’s worthwhile enough to share, I want to be able to do that! If I want to show someone how great it is, so they buy their own, awesome! Just the other day, Tom suggested I pick up Gary V’s book. I was torn, Gary goes between being inspirational for me, and my wanting to punch him. I told him, “You better be right, I don’t have money to buy books I won’t want” Tom lucked out, and Gary V rocked it. “Crush It!

” is worth the buy. Had Tom bee able to loan it to me for two weeks, I’d have read it for a day or two and bought it.

What I’m not sure about, and don’t see mentioned, can the person I lend the book to, make annotations? Will those come back with the book? It’s not exactly what I want, which is two people, two copies of the book, sharing notes. But it might be closer, and with Android, certainly more likely.

Add to that the free in store reading, that’s kinda awesome. Gimmicky for sure, I haven’t been in a B&N in months, but I might visit one more often with a Nook in hand. 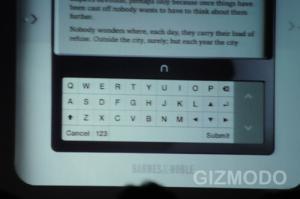 The second screen, while kinda weird to think about, sounds awesome. I hate the keyboard on my Kindle. it’s small, hard to use, and mostly in the way. I’m a note making fool and barely use it.

If I could have a keyboard when I needed it, and say media controls (I’ve never used them on the Kindle, but still) always on the bottom, NOT interfering with reading, all I gotta say is w00t!

I hate closed systems. Sure I don’t want crazy hacked instability roll your solution shit, but I always like to be able to mod my stuff. I jailbroke my iPhone to have themes, I hacked my Kindle so I’d stop looking at old Bookplates and authors. Andriod, while I’m not a fan of the phones, opens some seriously awesome doors for the Nook. Hell that second screen could be streaming internet radio, or playing MP3s while I read, without me having to leave the book to control that function. It could show me a running tally on the notes I’ve written so far, or a live dictionary. hell it could be showing me twitter! All while I read my book.

The one thing that gives me pause is two parts really. It’s Amazon. I’ve had my Kindle for maybe 6 months, bought dozens of books. I like being able to fire up amazon, find a book, and assuming there’s a kindle version, begin reading in under 5 minutes. Sure I can go to the Barnes & Noble site, but it’s not the same, sorry guys.

PLUS, what happens to the dozens of books I’ve bought for my Kindle? Some of which I haven’t read yet. Sure I can probably hack something together to strip the DRM, turn into a usable format, etc, but that’s a PITA. Kinda sad, what makes me not like the Kindle, also locks me into it unless I’m willing to lose my purchases. Way to go Amazon.

Want to see me live and in person? I'm very personable and some say … END_OF_DOCUMENT_TOKEN_TO_BE_REPLACED