You are here: Home / eBooks / What makes the Kindle awesome, isn’t Amazon.

It’s funny I was reading Joe Wikert’s post on the death of the Kindle, when Amazon released it’s long, long, long awaited firmware update 2.3, adding a few, but not enough of the things Joe mentions being conspicuously missing from the Kindle.

Joe has some really good points, and sadly, 2.3 doesn’t negate many if any at all.

Then I got to thinking, what makes me still recommend my Kindle? It’s not the Kindle itself, it’s only a little bit Amazon itself, though I do almost all my buying on amazon, and really like the whispernet service.

it’s the incredible third party ecosystem that has grown around the Kindle to make it a truly kick ass device. 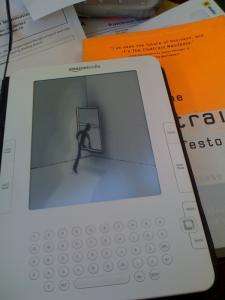 Enter the hacks. My Kindle now shows images I like to look at, when it’s asleep. The font is now darker, easier to see, a much improved way to read. Why couldn’t Amazon provide that functionality? It doesn’t impact performance that I can tell, it doesn’t cause system instability, no crashes, etc.

This thought came to me when I was reinstalling my screensaver hack, because even after months of no new firmware updates, years of the same three “experimental” features never getting an ounce of love from Amazon, i still couldn’t pick my own images for the screensaver. I was still stuck with the dead authors Amazon thinks I should see.

I still couldn’t pick the font I wanted to read in, stuck with a terribly light, hard on the eyes font. Why?

Now look at services like instapaper, kindlefeeder, and Calibre. While I’d never want those great ideas and awesome entrepreneurs to be thwarted, i’d love Amazon to show them some love, buy their services, buy their code, hire them, something. 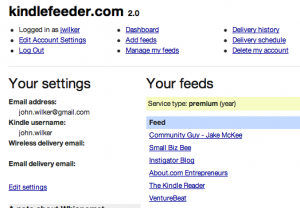 Kindlefeeder delivers a mobi formatted newsfeed every morning, it’s there when I get home from the gym. 20+ of the blogs I read daily, are right there, the most recent posts since the last morning, ready for my reading. Why can’t amazon offer that? Oh wait, I can pay $ for every blog I like for Amazon to send it to me.

Then there’s Calibre, which I’ve used off and on for 360|Whisperings, but now also has a nice new feature I love. I love the Harvard Business Review. Sadly it’s STILL not available on Amazon, but Calibre allows me to plug my credentials in and receive a mobi magazine formatted article. It looks just like any magazine you’d pay Amazon for. I’m already paying for HBR, but it’s nice to be able to get it in the format I want it to be in.

The last feature that Amazon should have included but didn’t is Instapaper, which I’ve long used in my surfing of the internet. Find a site I like, mark it to read later. Now when I mark it to read later, I get a weekly mobi formatted new feed on my Kindle. Where I can save it and read at my leisure.

All these hacks and services are what make the Kindle a kick ass device. It’s software is lackluster, it’s feature set dated (Folders? Tags? Desktop organization? Hello Amazon), it’s hardware uninspired to say the least. Thank god for smart ingenious people who work to make up for Amazon’s failings.

Maybe Joe is right, maybe Amazon won’t stick with hardware. if they won’t step up, I think it’s for the best. I think they’ve done great things for the eBook marketplace, I think they can again if they actually put some effort into it, but to pull a move like they’ve pulled…? Weak sauce.

Make an effort Amazon, it won’t take much, and you stand SO MUCH TO GAIN.

The effort isn’t really that much. More frequent firmware updates for sure.

A hardware refresh yearly at least, or look at Apple, small changes between the larger updates.

Both of these things are a must for Amazon to remain relevant in the eReader hardware space, for the Kindle to be more than a footnote in the eReader story.

Want to see me live and in person? I'm very personable and some say … END_OF_DOCUMENT_TOKEN_TO_BE_REPLACED