You are here: Home / Business / Dropbox as Anecdotal evidence of Mobile platform strength? 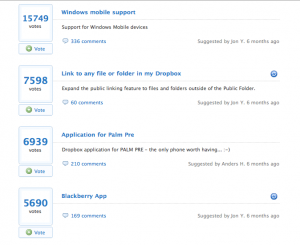 I was cruising around the dropbox blog and saw that they have a public voting site for feature requests. As I scrolled through the list, I noticed the mobile device requests.

It pretty much supports my assumptions on the mobile platform space right now.

iPhone, iPad, and Android are all already supported, WinMo (unclear, but I assume phone 7, but it was 6 months ago) is the next highest demanded platform, by a large margin. Pre and Crackberry bring up the final two spots.

Sure it’s anecdotal, but I can’t help but wonder if dropbox doesn’t serve as a microcosm of the mobile space? Clearly with their business on the line dropbox is pursuing the most demanded platforms first, sorry Pre folks, I know you love your phones, but you bet a lame horse.

Want to see me live and in person? I'm very personable and some say … END_OF_DOCUMENT_TOKEN_TO_BE_REPLACED