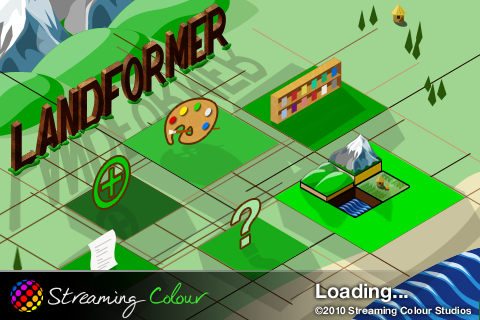 I met Owen Goss at the first 360|iDev I organized, and instantly liked him. If nothing else he takes my polar bear jokes in stride, that’s pretty big :)

Owen’s not new to games, but I think this latest release is his coming out game. This is the game that’s the start of truly awesome things for Owen.

LandFormer is a straightforward puzzle game, you don’t really need instructions or tutorials, pick it up, try it out and away you go.

The objective is to make the ground perfectly flat; raising and lowering the terrain in patterns to accomplish your goal.

You’ve got 6 patterns and 2 choices of terraforming; Up or down. Each level has a  number of moves it should take to clear the level. Some are pretty straightforward, but the game quickly moves into, “hmm well maybe this, then this… nope, undo!” Which is good. I’m usually pretty quickly turned off by games that start too hard, or don’t progress past easy. 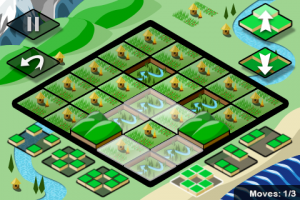 It’s very addictive, sitting there staring at the terrain, thinking through permutations.

Graphics wise the game is stunning, a perfect match to the game play. Ditto on the sound, the effects and background music are incredible and all blend together for a calming, tho sometimes frustrating brain game.

As if all that wasn’t enough, Owen has not just made the game expandable with In App Purchase, but also for free, you can exchange levels. You can email a level, heck you can tweet a level. People can follow your URL and add the level to their game to play. It’s easy to create levels, it’s basically solving a map, backwards :) just start arranging the terrain, when you’re done, save and share. 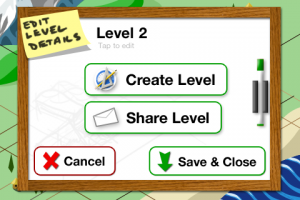 The IAP is awesome, I’m really glad he went this route. I think IAP is one of the best features for game devs, to make money with their hard work.

Don’t get me wrong, I don’t want useless crapware that I can’t use without purchasing something. Quite the contrary with LandFormer, you can go (I assume) forever without ever buying any of Owen’s premium content, getting levels from friends and the internet, but why? Sure that’s fun and I hope we’ll see more and more tweets with levels in them, but Owen has put together a shit ton of levels for purchase, why not get those and test your abilities. And test them they will!

Oh and the game itself is skinnable, how awesome is that!?

If you haven’t already grabbed LandFormer, go get it! Heck even Apple likes it. 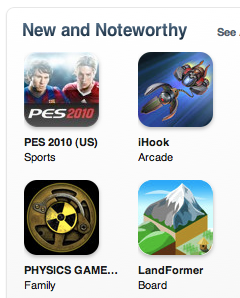 My only complaint (and I know Owen started this before the iPad was announced, at least I think so) is that it’d kick ass on the iPad. Either more complex patterns, or larger maps, etc. I think it’d be awesome. I’d suggest that be his next project, but he owe me bacon farmer!

Want to see me live and in-person? I'm very personable and some say … END_OF_DOCUMENT_TOKEN_TO_BE_REPLACED