You are here: Home / Around the Home/Office / My Review, the iWatch 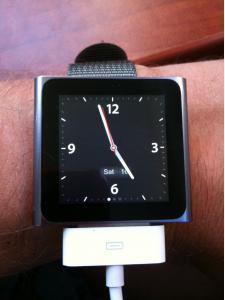 Whether Apple would/will release an iWatch or not has been a source of speculation and flame war for years.

The first thing that came to my mind during the recent Apple event around iPods was “Holy crap, the new nano touch, would make an awesome watch!” I wasn’t alone in that. My Pal Christian made this review before I got mine.

Clearly Apple at least contemplated it as a watch, since it has a built in setting for watch face on wake. Essentially when you touch the wake  up button, it comes to life as a watch. Maybe this is Apple testing the water for an honest to goodness iWatch. I certainly hope so, because as much as I like my iWatch, there’s a few things I’d like to see improved.

It’s an iPod. I mean really, that’s it’s main feature and like all iPods it’s good at what it does. Plug in some headphones and away ya go.

It’s a radio. That’s pretty sweet. I only listen to the radio in the car or the house if we’re cleaning. Plug in headphones (needed as an antenna) and (again) away you go.

It’s a pedometer. While I’m sure being on my wrist is less than accurate, it’s kinda cool to be able to track movement and upload it to nike for their fun little web games. Gimmicky, sure, but fun.

It’s a conversation piece. It’s easily recognizable as an iPod, I’ve had my Vet, counter people, etc all notice, and ask about it. The show-off geek in me loves it! 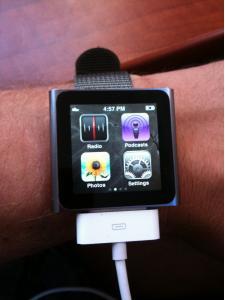 Changeability. Since it’s not a “real” watch, it doesn’t come with a band. As such you can pick the band(s) you like and change them frequently. I have a plain old nylon band, that Christian mentioned in his review. There’s already a small industry popping up making watch bands just for the iPod Nano Touch, there will be more still.

Covers the basics. It tells time on wake. A swipe to the right and you’re in stop watch mode, another and you’re in timer mode. Done. They covered the three basic features any watch should offer.

It’s an iPod (Features). Being a watch isn’t it’s main purpose in life, as such it tells time well, but if you want adv. features like chrono, multipletime zone support, etc, etc. Look elsewhere.

It’s an iPod (durability). It’s not a g-shock, or even a Citizen. It more or less CAN’T take a beating. It’s not water proof or even really water resistant. The earphone hole is right there, a drop or two of water/rain and bam, no more watch. And because it’s Apple and they don’t believe in rain, no warranty replacement. The face isn’t durable watch crystal it’s glass (as far as I know) a good whack on a corner and you’re likely to be spending another $150ish at the Apple store for a new ‘watch’.

It’s not iOS. When I saw Steve showing the device off, i hoped, really really hoped that being touch enabled, it was running iOS, even if just a subset of iOS. From what I can gather, it’s not. It’s running the more basic iPod firmware with touch added on. I was looking forward to people being able to create their own unique watch faces, or watch apps. Shoot, i’d buy ones that were well made. The other downside of the current firmware is a pretty kludgey way of getting around. Since there’s no “home” button, to get ouf apps you swipe to the left. If you’ve gone deep into the settings app, that’s a lot of swipes. :( 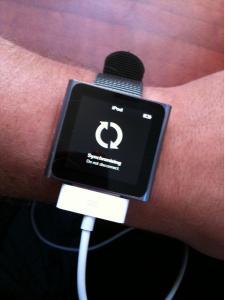 What would make it awesome(r)?

iOS for sure. Or at the least, an SDK. Even if it’s a stepchild SDK like the old ‘Games for Clickwheel iPod’ SDK. Let creative folks have a stab at making it a really fun device. There’s so much potential for this little square. If not iOS, or an SDK, i hope Apple will at least throw a bone or two and update the watch app. Maybe throw in multiple time zone support, or more than two watch faces. Maybe digital? Old school night stand clock? Lots of options!

Long shot, but locking the clip closed? I’m experimenting with which was the clip should face. The iWatch hasn’t fallen off, but it’s come close, and I’m not sure which way I clip it to the band will matter. Will it come off tucking my shirt in, or reaching for my keys? It’d be kind cool to have the clip latch somehow. I know this will never happen though.

User Customization. This sorta falls under the iOS section, but there’s some stuff that coulda just been in the firmware. The iPod allows me to sync photos, but those photos can’t be a background image. There’s 9 built in choices to choose from, but why stop there? Apple has finally gotten over their “users can’t select their own backgrounds” thing, so why not follow that through on the iWatch? Or let me assign an image to the watch face? Black or white are the current options. Why not a picture of my wife and I, or my dog, or a robot?

I went into this knowing the features that existed, so if nothing ever changes and Apple never touches this device again (not unheard of) I’m still happy with it as a watch. I’d love it to do more, but hey, it’s an Apple product, i’d love them all to do a little more than what Apple allows. Maybe someone will jailbreak the iPod Nano Touch? I hope so :)

It’s a fun watch, and a lotta bit geeky. If you’re a hardcore watch person, probably not for you. I love watches, I have a dozen or more, and this iWatch is just a fun little computer on my wrist.

Want to see me live and in person? I'm very personable and some say … END_OF_DOCUMENT_TOKEN_TO_BE_REPLACED