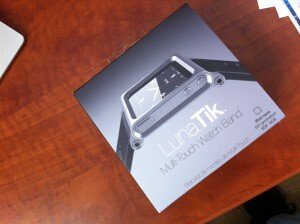 I’ve already reviewed the iPod Nano as a watch, this review is an addition to that. Primarily for the Lunatik, watch enclosure. Or “Multi touch watch” as they call it.I got in on this awesome kickstarter project very early, well before they even met their minimum funding level. You can get more info at the new site, and actually purchase this awesome kit.

This kit pretty much takes the “iPod on a watch strap” and makes it iWatch. It’s likely the iPod will never leave this enclosure except possibly if it does and needs to be replaced.

This is now a watch. Which rocks! 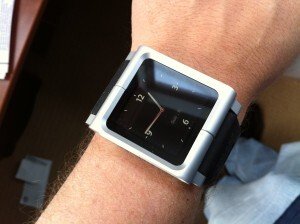 now if Apple would just release an SDK, so folks can create awesome watch sized content I’ll be happy.

Much safer than being clipped to a band.

Essentially stops being an iPod and is a multimedia capable watch

The band is very prone to getting dirty. I’m hoping that as the silicone material of the band ages a little and gets worn, it’ll stop attracting so much dirt and dust. 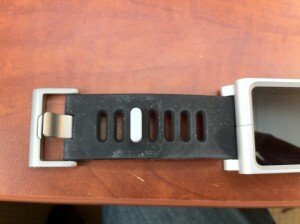 If not I’ll be looking for an alternate strap. Maybe my previous strap, though it’s not wide enough really.

This isn’t a surprise, but it’s still a pretty bulky watch. It’s a trade off for sure, I’m less worried about my iWatch getting busted by an accidental wall bash, but now it’s a very visible part of my wrist.

All in all I really like the LunaTik, and would recommend it to anyone looking to watch-ify the iPod Nano Touch. 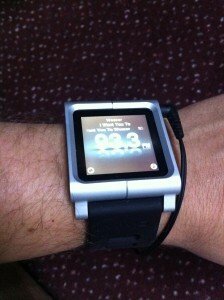 I will say that at the gym I’m much less worried about yanking my headphone cord now, which happened a few times, and took the iPod off the strap and sent it flying. Not sure which is better but the iWatch is definitely gym ready in all that aircraft grade aluminum.

I’d love some apps for this. Not all of course, not the full app store experience, but still. my fitness app would rock, a slim down interface for rep counting, Alternate watch faces, etc.

Without Wifi (maybe a dongle? or future version) there’s a lot that would be pointless or require a sync to accomplish but still, it’d be nice!

Want to see me live and in person? I'm very personable and some say … END_OF_DOCUMENT_TOKEN_TO_BE_REPLACED