sometimes you want to quit

As is typical of life, I’ve had this blog post sitting in a Safari tab to be written about. I’m in a blogging mood today so I sat down to talk about this post, and turns out it’s a company who just signed on as a sponsor of 360|Flex. There’s no real correlation, but I like that my interests intersect those of the people I work with.

360|Conferences is a weird startup. Well not really, but in the circles I travel it is. People I know and interact with are starting the next foursquare, the next yelp, etc. I’m running a services business, organizing conferences. Something that very few do outside publishing companies… I am in a venture with two friends, that while not in stealth because that’s lame, there’s just not much to talk about yet except to say go here

I’ve wanted to quit several times. Back when my business partner was Tom, and even more recently when it was just Nicole and I. Whether it was the fickle nature of speakers and attendees or sponsors who I give my all to, to support them, and who in turn also sponsor events that treat them like just one more logo on the site. 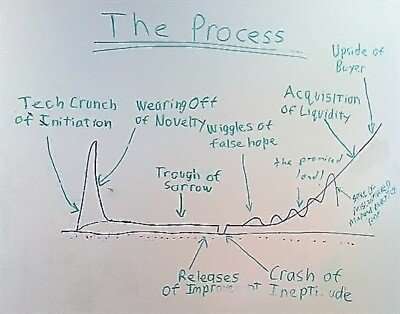 I stole this from Jason’s post (which if you haven’t already, go read in it’s entirety!)

This graphic really sums up the experience for me, so far.

It’s a roller coaster and I wouldn’t trade, but like all things theres lots of lows, to slog thru if you want to succeed.

The post is a good read and I’ve had similar experiences where the value of my product (the conference, my email list, the attendees) has been under valued, and bargained for, and where I’ve had to choose the high road or the low. I’ll be honest I’ve chosen both, but am now more comfortable taking the high, and living the the nagging feeling i chose wrong (even when I know I didn’t)