You are here: Home / 360Conferences / Some Thoughts on the ‘App Developers Alliance’ 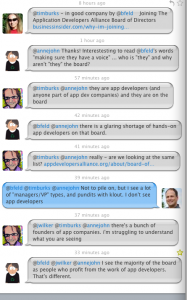 I had an interesting, albeit short twitter conversation today about the App Developers Alliance. I’ve been watching this group/site/organization for a little while now, debating whether I should reach out. I think 360|iDev and even 360|Flex could be great partners for an organization focused on those making apps, since, well you know that’s the focus of those conferences. But I’ve held off. Namely because I could never tell who I’d be talking to, or what they had to do with App Development.

Lately they’ve added to the Board of Directors which is what caused the twitter discussion. I should be clear I have no problems with anyone on the list, and actually really respect Joel Spolsky. However no one on that list represents the “app maker” community. Sure many of them employ and manage app developers. Some of them make money from developers leveraging their platform, some of them love talking about apps. But for something called the “App Developers Alliance” I’d expect people actively developing apps to be on the BOD. And that doesn’t seem to be the case.

I mean as a comparison, Appsterdam is run by people making apps. Not people managing people who make apps, or people who invest in apps, or who want to sell ad networks to app makers. It’s run by coders.

It seems the whole point of the alliance is to bring together those who have platforms they want developers to use (buy), and then, well I don’t know what after that. Looking at the service discounts, it’s a mix of companies that represent the BOD’s employers or investments, which seems a little shady to me.

They’re also not open to criticism it seems because After Tim and I made our points the conversation went dead. I personally avoid companies who can’t operate transparently, ESPECIALLY when it comes to criticisms. It’s also worrisome that when confronted on the lack of app developers on the BOD, the conversation ends.

I’m not (yet) condemning the concept of the App Developers Alliance, but I am seriously questioning it’s motives, and will be watching with great interest. I think things like 360|iDev and 360|Flex would be a perfect fit. Not from a sponsor standpoint (they do mention loving to sponsor events, but I suspect that’s just for marketing purposes). I think events that are really and truly focused on the developer community make a ton of sense for an organization that also claims to be focused on the developer community. If our focuses align, it seems like a great fit. The “if” is the big question right now, and I’m waiting to see if there’s an answer.

Want to see me live and in person? I'm very personable and some say … END_OF_DOCUMENT_TOKEN_TO_BE_REPLACED