You are here: Home / Around the Home/Office / Where I drive I Chevy Volt… And Like It

So I got to borrow a Chevy Volt for a few days last week thanks to Klout and Chevy. I’m supposed to disclose things like this is it was a free loan for 4 days.

Ok that said, I’m not an American car guy. in fact I’ve never 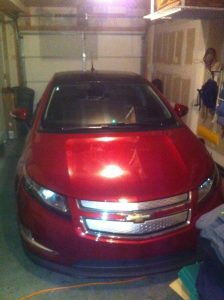 owned, been inclined to own, or liked anything made in America. Sure there’s some nice whips coming out of Detroit, but none made me want to walk away from my beloved Austrian Engineering.

While I’m not about to sell my paid off A4 to get a Volt, if my situation was different, the Volt would be a contender.

But the Volt is a nice looking ride. Externally it’s a sporty little hatchback, with clean lines and some definite aggressiveness. The headlights (usually my first impression is based on them) are nice and angular. They were your basic Halogen, which felt cheap to me.

Before I go inside, my only complaints on the exterior are: the mirrors are a bit big and stick out like Alfalfa’s ears, and at least on the model I drove, weren’t automatic when parking, etc. And the front end sticks a bit out from the wheels. Even with just me in the car, pulling out of the alley I park in caused some scraping. My A4 with sport suspension has no issues. Big nose. 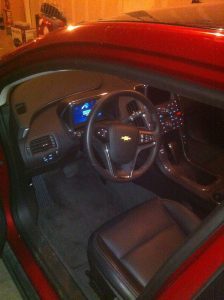 The inside is pretty nice. A good amount of brushed alum, which always adds class :)

The console is all touch button goodness,  with very few actual moving buttons. I found the interior quite nice, which is usually what I hate the most about american cars. Chrome does not make something that sucks, better on it’s own.

My unit came with Navigation, it was ass.  One of the worst UX’s I’ve ever seen. The screen was way too busy, the touch screen (oh yeah, the center screen is a touch screen!) buttons were confusing, and overall it wasn’t fun to use. Worse yet, if you were moving you couldn’t use it. On the move and need to change your destination? Too bad. Find yourself lost, too bad. I understand it’s a safety feature, my car displays a disclaimer that the passenger should be the one to use the nav while in motion. The Volt straight up locks the user out of the Nav until you come to a stop. 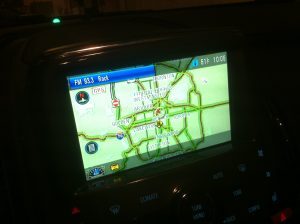 This is one of the less busy nav screens.

As you can see, the buttons are quite nice, pretty responsive. 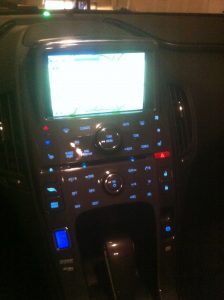 The only downside of this dashboard…. It’s packed with buttons. A few times I found myself driving and staring at the dash trying to find the button to change the temperature or radio station.

Much like a prius the Volt has a gas motor as well. Unlike the Prius the motor is just to generate electricity, not provide drive power. Accelerating simply takes more juice, but you never get a bump from an engine.

The battery is only good for about 30 miles or so, then you switch to the gas motor. It’s very flawless, I didn’t even feel it. If your daily drive was under 40 miles you’d almost never use gas as long as you got to charge the car at night. If you could plug in during the day you’d be golden.

Also like the the Prius, the Volt has a mesmerizing display showing energy usage and flow as well as a fun little ball that bobs up and down to show you how your driving is impacting energy usage. The data and graph types will love the display. It’s chock full of neat tidbits about your driving and energy usage. 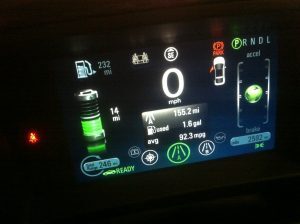 I can see why Prius people love to draft, you quickly get to a place where you want that ball to be neutral at least. Once you’ve used up your battery, I’m pretty sure you’re done. I did notice once or twice “Motor and Battery” as the driving force, but once I was on gas, it never that I saw went to “battery power” only. I wish when idling or coasting, the motor would charge the battery. Maybe it does, since on 110 it takes 8 hours to charge it, the motor just may not make a dent.

Speaking of charging, the Volt does not like sharing outlets. Twice i popped my GFI outlet while having the Volt.

I was definitely bummed when they said they needed it back, it was a fun car to drive. I was very impressed. I got tons of questions and everyone i saw asked about it, which was cool. I definitely hope to see more vehicles like the volt in the marketplace. I really… REALLY hope Audi rolls something like it out. While I do love my Turbo charger, I might sway to the Hybrid side.

Oh and the storage space.. While no where near a sport back like the A4, it did hold two full sized suitcases, and then some, so that’s not bad.

Want to see me live and in-person? I'm very personable and some say … END_OF_DOCUMENT_TOKEN_TO_BE_REPLACED