Stop comparing everything to an iPad WiiU controller as a helper for game play

I get it, we all love our iPads, i love mine. I’ve tried Blackberries, droids and such, and am back with an iPad.

But, that doesn’t mean every consumer device with a screen should be compared to one!

I was at a Nintendo event last week, for a sneak preview of their new WiiU. (Pronounced, I think. We you).

The big new feature of the WiiU is the game pad controller dealy. Which has a large screen (Which seems to be enough to warrant a comparison to the iPad).

During the event I asked a lot of questions of the demo wranglers, to make sure I knew exactly what the WiiU was, and how it was gonna fit into my life. Doing so made it clear, that much like the Wii before it, it’s less about whiz bang look at my pixels and more about, let’s make games fun and engaging for everyone in the room. However the WiiU is HD now!!!

The Game Pad (I honestly don’t know what it’s name is) is often not the primary game play device. That’s still the realm of the Wiimote (kinda nice to upgrade console and not need new controllers). I’d say about 75% of the games being demo’ed used the game pad as a helper device. In Rayman, the person with Game Pad, destroyed obstacles, and created platforms for the player to use in getting through the level. (see above) 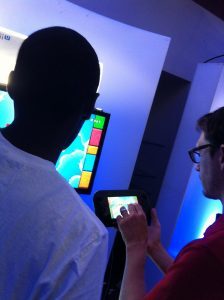 In Super Mario (world, 2, something) the game pad player, gave Mario platforms to jump on, to cross large areas, bopped kupas to keep them off Mario as he moved, etc.

This type of game play really makes the games more collaborative. The Game Pad has a touch screen, so you just tap around, making controlling things easy. It did also have two joysticks, a + controller, and a bunch of buttons like a PS3 controller. Many games were like that, using the Game Pad as an assist to the game.

The other type of game I got to play used the Game pad as the main controller in 1 person at a time games. Obviously it’ll be up the the game studios, but the games I played made excellent use of the game pad screen. In in one game (below) when your character entered a building, you had to use the game pad screen to navigate until you got back outside. It made the game more engaging. 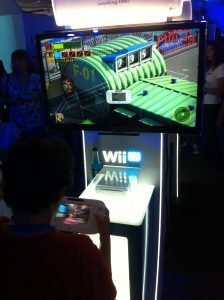 Having a touch screen right there in your hands also opened the game up to cool gestures. Need a gun in a game, draw a sideways “L” and your gun was available. No menus, no toggling, etc.

One game took the game pad in a weird place. It was a skiing game. If you were playing it, you had to look at the game pad in portrait mode and use it’s acceleromter to steer your skier. I guess everyone else would watch the TV, but the player never did. It was kinda weird. Most games leveraged the game pad really well to enhance game play.

So yeah it has a screen and an accelerometer, so I guess a comparison to the iPad is fair? Course, my guess is if you sat an iPad on a coffee table, AirDisplayed it to an AppleTV and used iPhones as controllers, all over Wifi or Bluetooth, (sarcasm warning) it’d be the same fun family/friends gaming experience, until a push notification made your controller disconnect, or a phone call comes in, etc. Course it would cost a lot more too.

I understand we love our iDevices, but not everything is trying to be an iDevice killer, or even a competitor.

Disclaimer: The games I played were almost all prototypes. They said we could post pics so long as they weren’t close ups, and included the game pad as well as the TV screen.

My thanks to Nintendo for a fun time, and an informative event, I can’t wait to add a WiiU to the house, or maybe Uncubed Coworking