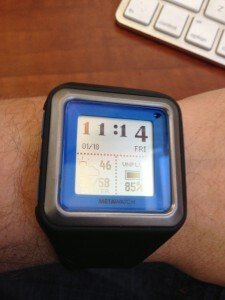 So a while back I did a review of my first iWatch (actually this was the first, but it was temporary). It was an ok watch, i had hoped for new features, and in the end the only firmware update that ever came out while adding new watch faces, didn’t do a ton more to make it an awesome iWatch. Of course now that form factor is dead and the new model is not “watchable” at all, so there’s that.

Now I have a proper iWatch, just no i. I’ve had the Meta Watch Strata for a while now, it’s a very cool smart watch. It’s more in the sport watch area, but they do sell a more dressy model. It connects over Blue Tooth Low Energy to the phone and shows you phone battery level, SMS messages, Caller ID, and… well right now that’s all. They’re still working out the bugs, so the emphasis has been on connectivity. I’m trying the latest beta firmware, and it’s come a long way from what shipped. 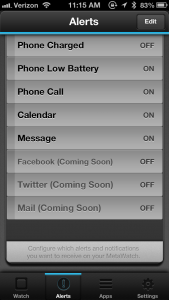 Right now it tells you just the basics, but when some of the coming soon features roll out, it’ll be great. I’m hoping i can create rules around some of it, a buzz for every email would suck, a buzz for emails from my wife, or a conference sponsor, handy. Ditto twitter DMs and @ replies. Some i care enough about, others less so.

It has been really handy to glance at my wrist to see incoming SMS’s without digging my phone out of my pocket. 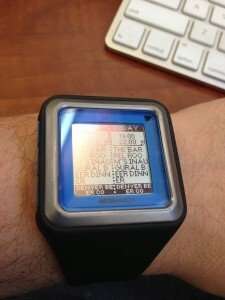 calendar widget has been pretty handy too since you can have two; today and tomorrow. reading a busy day isn’t easy. I suspect future updates will include more readable fonts, or more configurable widgets.

As Smart Watches get more and more popular the differences in approach emerge. MetaWatch uses a central connected app to push data to the watch. App Developers will write their apps, and they’ll reside in the MetaWatch Manager app, giving the user a single place to control it all.

Others like Pebble (I should have mine in another 9 weeks or something) from what I understand, push the apps to the watch. The example shown at CES was pushing watch faces. If you’ve read the other reviews, you know watch faces is one of the things I most loved about the iPod Nano. Pebble made it a front and 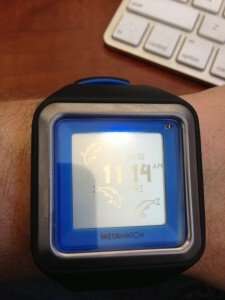 center feature as well. MetaWatch seems to have gone a different direction, at least to start. If you choose to have a full face watch face, you have A choice.

It’s not ugly, but I’m not really a fish person. I’d love to see more, and suspect as time goes on and developers begin releasing things for MetaWatch, we’ll see more clever faces.

Overall I’m really happy with the Strata. The Smart Watch space is still very much in it’s infancy so there’s a lot of room to grow for everyone in it. MetaWatch is clearly serious about it, since having the Strata they’ve gone from 1.0 firmware to 1.2 (yes three releases) but that’s in maybe 3 months?

Pros: Geek cred. pretty handy for basic stuff, way more handy in the future. Doesn’t make a noticable impact on phone battery. It’s connected so definitely does use battery, but not so much I’m carrying a car batter around.

Cons: Not much you can do with it right this second. Weather and phone battery at a glance are cool, and I find them quite handy, but that’s it. Unless you love stocks, it does ship with a stock widget.

A few more pics below just so you can see the MWM app etc.

Want to see me live and in person? I'm very personable and some say … END_OF_DOCUMENT_TOKEN_TO_BE_REPLACED