You are here: Home / I am a Consumer / iWatch Review: Pebble 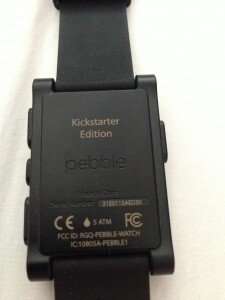 I really hope Apple takes a while to deliver on their iWatch, at this point I have far more than I can wear without looking like i fell out of the 80’s with a few watches on my wrists. (Yeah I admit, i did that)

I backed the Pebble watch the moment i saw it, in fact only like 3500 people out of the 76,000 that backed it, backed it before i did.  Ok On to my thoughts.

It’s pretty damn awesome. the delays in shipping it (was supposed to ship in early September 2012) were worth it. Not only is it really polished, but they added a ton of things to future proof it. Accelerometer, magnetometer, etc. Things it didn’t need right now, but can’t be added once shipped. 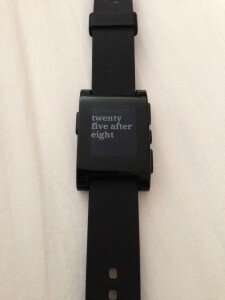 Overall the experience is really nice. The display is crazy readable no matter the lighting. A flick of your wrist turns on the back light, which is kinda cool. There’s a setting to make it automatic, but i didn’t see it working. I assumed that would mean it was just on all the time in the dark, and that isn’t what happened, so i set it back to wrist flick mode. The thing I like the most (which i liked the most about the iPod nano as a watch too)  is the cool variety of watch faces. I really liked the fuzzy time face. Kinda nice to have time in the same terms we usually give to people when asked for the time. In the end I went with the big time face which takes up the whole face with 2 rows of numbers. Hour and Minute.

Physically the watch is quite nice, falling somewhere in between sports watch and out to dinner in a suit watch. Dressing up, pick a more elegant watch face. The charging is really nice. A nice magsafe style connector on the left of the watch body. The connector just snaps on. There’s four buttons, the two on the top and bottom right are up and down, middle one is “select” 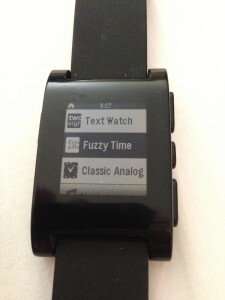 OS wise my two main complaints are 1. There’s no concept of just exiting the settings. I have to go and re-pick my watch face. I’d rather just press the top left button to go “home”, home being watch face. That’s what happens when you’re reading a text message. 2. the present faces (I assume the watch Face SDK will expose more things soon) are bare bones. I’d love a face that included the date, maybe the phone’s battery status or the watches battery status for that matter. I’m not actually sure if there’s a way to see the watch battery level, maybe way down in settings somewhere.

Reading Text messages is really easy. the font is user selectable; Large or Small. It’s really easy to glance down and read the message.

One thing that I found interesting, and awesome. You can answer or decline a phone call. The Metawatch doesn’t do that that I noticed. YOu can see the Caller ID, but i never noticed buttons for accepting or declining the call. It’s pretty handy.

The one thing i noticed that’s drastically different from my Metwatch (I’ll do an actual compare and contrast post soon) is that the Pebble stays connected to my phone way more reliably. What’s nice is the iOS app knows when it’s not connected and will bring up an alert that re-connects the watch. Even from the lock screen. so you’re never left wondering if you’re still connected. That’s really nice. 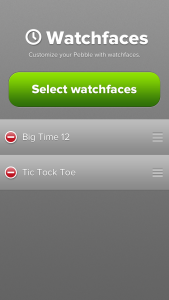 The iOS app itself is really basic. Which is good and bad. Good in that there’s no fluff, bad in that the UX is all kinds of crazy. Views slide side to side, top to bottom, it’s like a labyrinth. Right now it’s ok, there’s only 2-3 other screens, moving forward it could get goofy.

That said, what’s there is nice. You can see which faces you’ve installed, and browse those that are available for install. 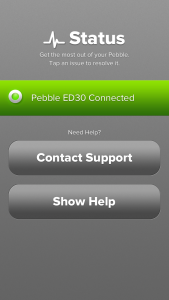 The only other screen is the connection/update screen. From this screen you can quickly see if the watch is talking to your iPhone. What I like is that this is where software updates are displayed as well. Under that green bar would be an update bar. Firmware updates are delivered of BT to the phone. It’s really q nice experience.

a status light. Green is connected, Red is update available or not connected, and the watch face store. (i don’t know what you call it, and presume that’ll be the central repo of faces and apps and such). As things like twitter, facebook, etc integration roll out the UX might change to handle more settings, but for now it’s simple and nice. Kinda Apple-esque in only showing you what you need. I’m a fan of more detail, but oh well.

Over all I’m really liking the Pebble. It’s not as bulky as the Metawatch, but offers less handy info at a glance. I got really used to Phone battery and weather right there with time.

It’s a more attractive watch with easier to read display so that’s a big plus. It is water resistant, showers ok, not sure how far you can take it. I don’t wear watches in the shower usually so not something I care too much about.

Overall the Pebble does a ton of things right. Like the Metawatch, it’s not a complete package, and whether it will be or not is up to both Pebble and the developer community. We’ll see how it goes.

In the meantime it’s a great watch to wear and looks good on your wrist.

Want to see me live and in-person? I'm very personable and some say … END_OF_DOCUMENT_TOKEN_TO_BE_REPLACED