A bit more on Smart Watches 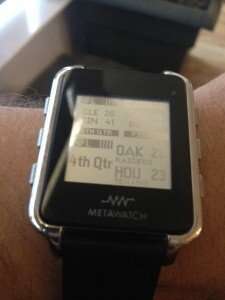 1. NFL updates are cool, if you’re into that

So I’ve been two timing my Pebble the last few weeks, with the Metawatch Frame. I could see my Pebble being second string really fast. This isn’t an in-depth review of either, more of a quick comparison of them.

The Frame is way nicer than the Strata which i kickstarted, and really didn’t like the look of. it was ok, but a bit too sporty. The Frame is damn nice looking, has a bit of weight to it like a real watch (real being the dumb variety) Nicer than pebble by far, even when using a fancy watch face :)

I’ve talked about Pebble vs. Metawatch before, and really, i think if these two companies merged, it’d be the perfect storm of non Apple smart watches.

I love that Pebble has a pretty active community making faces and apps. I love that Metawatch ships with some neat apps (if you’re a football fan, the NFL widget is pretty freaking awesome, i tried it last sunday just to see, See Pic 1).

I hate that Pebble uses Apple’s new notification center hooks, which basically push all notifications to the watch. I hate that I have to choose what goes to the watch by choosing what I see on the phone. Two very different use cases and experiences.  Very not fun to set up.

I LOVE Metawatch’s smart filter. Rather than bork around in the settings app, it simply watches every notification that passes through it and gives me a toggle to no longer see those. It’s quite nice.

I love that Pebble packed a ton of sensors into their device, i wish Metawatch had done that. I still flick my wrist to try and see the time, and nothing happens with my Metawatch.

I miss the apps like tabata timer, and camera button that Pebble has (third party), and will likely miss the things they’ve got planned like Yelp and Foursquare and the like. Metawatch from what I can see just doesn’t have that support yet(?) from third parties, which i think is a really big deal. I had hoped that in coming back to Metawatch after almost a year, the manager would be overflowing with widgets and watch faces, and that’s just not the case.

One of the things I think Metawatch does great is you get 4 screens to load up. It’s nice to switch between so much info so easily.

Some are neat, like the NFL stuff which does me no good. Some are (to me) pointless like the chinese lunar calendar stuff. Stocks, AND stock twits stuff, which again im sure cool if you like that info on your wrist. There’s still only three watch faces, one of which is useless unless you can read chinese (not sure which dialect or anything)

I’ve been thinking about what widgets i’d like; and really don’t have many, but here’s what I came up with.

I’m guessing it’s not possible, but copying Pebble’s flick to light would rock, the biggest downside of Metawatch is it’s choice of display. in certain lighting you can’t see the display at all, but with it’s backlight you can, having to push a button to do that is the pits.

So yeah I’ve now played with both devices for a good bit of time, Metawatch currently is enjoying wrist time, and likely will for a while. It definitely needs more but is a nice watch. I’ve been tempted to tap into my child of the 80’s roots and sport two watches, but well i haven’t yet.