You are here: Home / Around the Home/Office / My kingdom for a Stylus

Well maybe a sub-kingdom, or duchy i don’t care about. My pal Terry wrote up a review of the Pencil by 53, which got me thinking about my next stylus. Terry did an awesome job and even did a tl;dr; flowchart for deciding if Pencil is right for you. In his view (and I agree after playing with his for 5 minutes) unless you use only Paper, and don’t care about exact precision, and have money to burn, don’t bother.

Next, yes. I have more than one.

I’ve tried the shit ones, with the nub made of foam.. they’re all crap. Squishy, weird, not remotely precise and of course not “smart”. 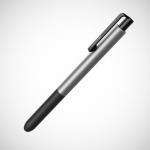 I have a Touch Pen that i like quite a bit. It’s also not “smart” but it’s capable. For one it’s just a nice pen, and I love me some pens. It’s my go to pen, i cary it everywhere, even when I’m not carrying my iPad. It’s just a damn nice pen.

As a stylus, it’s ok. It’s not as squishy as those foam jobs, but definitely very squishy still. It’s a rubber tip that works the same as the foam crap. It has a large tip (he he) so precision is nonexistent. I kickstarted it, because the makers are cool and I know they don’t make crappy stuff. I doubt I’d pay retail, but right now they appear to be on sale for $20, I’d pay that. If nothing else it’s an awesome pen, and a usable stylus.

My ‘next’ stylus has me really excited. It might even arrive this week, who knows. It’s another kickstarter project, the TruGlide Apex. As with all kickstarter projects there’s a fair bit of hope involved. What i liked about this was that it’s “smart” in the sense that it’s BT and powered. It’s not made by an app maker and they’re working with app makers to add support. My hope is that they continue working with app makers, and that the apps I love (and those that don’t exist yet) leverage this tool. I also like that the tip isn’t huge and foamy. The site explains how it works, but basically it generates a field that mimics a finger, while having a foot print much smaller. My biggest gripe is that I can’t write with other stylii because the tip is so big it obscures what I’m doing and makes me have to write much larger than i should.

When Pencil was announced i had two reactions; 1. that’s pretty 2. Shit, that means they likely won’t support many if any other ‘smart’ stylii. It’s also unlikely other apps would support Pencil, though who knows, maybe 53 will release (or have they and I don’t know) an API.

So yeah, having seen Terry’s Pencil, I’m really excited to try out my TruGlide (why does it have to sound like it’s lube??!) when it arrives.

I’ll post an update once it arrives and I play with it, in the meantime, what’s everyone else using for stylii? Please don’t waste anyone’s time with “If apple wanted you to use a stylus they’d sell one, your finger is just fine” posts. If stylii aren’t for you, great.

Want to see me live and in person? I'm very personable and some say … END_OF_DOCUMENT_TOKEN_TO_BE_REPLACED