You are here: Home / I am a Consumer / I like this stylus! My Review of the TrueGlide Apex

I’ve been on a hunt for a stylus i like for a while now.

I tried the O-Stylus, but was afraid I’d break it, but it is beautiful and I’m excited to own one of the first.

I tried the Lunatik Pen, it’s great, but more a typical sausage stylus, squishy tip, kinda looks like a penis. BUT, it’s a great pen! 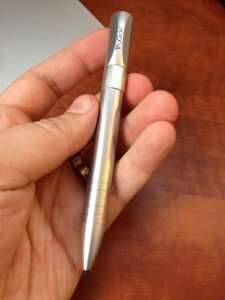 I backed the Trueglide stylus on kickstarter and it arrived a few weeks ago. LOVE IT. It’s nice to hold, and easy to use. Best of all since it’s not Bluetooth (more on that later) it works with any app, no API needed.

What i like is that the tip is actually the size of a pen tip, it’s not a big bulky finger sized tip that obscures the screen. The creators came up with a cool solution. The Trueglide generates a field that the capacitive screen reads as a finger, despite the size of the tip that’s actually touching the screen. Therefore I can see where I’m 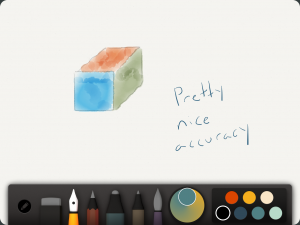 working. Pretty inventive, and it works damn well. I use Paper to doodle, and you can see it works quite well.

There’s a lot to like about this stylus. It’s lightweight, easy to use and not at all hard on the eyes. There’s even a nice little hump on the top pieces that’s there to keep the stylus from rolling away, great idea. While it is light, it’s durable. I’m much less worried about carrying it around in my bag. I might use the pouch it came with, but wouldn’t freak out if it was just in a pen slot in my bag. 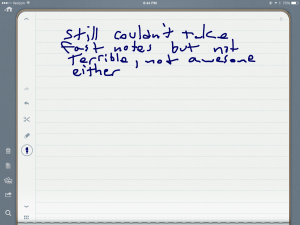 While note taking on the iPad is still not quite there (writing notes, not typing them) the Trueglide definitely has gotten close. The note to the left was written pretty slowly, I’d never be able to make notes in a lecture or meeting or anything. Maybe i need to start doing sketch notes, that’d probably work better.

I only two complaints with it and neither are huge or deal breakers at all.

1. I’d rather some type of push button to turn it on. To turn it on/off you twist the top, which is also how you change the battery. Kinda like a maglite. Not a big deal but can be annoying, one review i read, the user twisted the wrong way too tight (PEBKAC for sure, but still) and broke it.

2. I love the price point of this unit, but would probably have paid more to have BTLE, and an API. Kinda like how Paper (IIRC) can tell Pencil from finger, so you could erase with a finger, draw with the Pencil, etc. I think there’s some cool stuff that could be done with something like that. Again, not a deal breaker and it certainly hasn’t hampered my use of it.

If you’re looking for a stylus for your iPad, I’d definitely take a look at the Trueglide Apex, it’s pretty damn nice. No squishy tip, doesn’t block out the point of contact on the screen, I’m still on the original AAAA battery with moderate use most days.

Want to see me live and in person? I'm very personable and some say … END_OF_DOCUMENT_TOKEN_TO_BE_REPLACED