You are here: Home / Business / So, I went to Hong Kong

Had a great time, I’d go back. Their mass transit is amazing.

Long but I hope a good/interesting read.

I went for two reasons, Tom had asked me to go with him (he was attending a conference), and I figured I’d see if Hong Kong had an iOS community and would make for a good 360|iDev city. Sadly Hong Kong, won’t be a 360|iDev city. In talking with a few developers I learned 2 things; 1. there aren’t a ton of developers, let a lone iOS developers. 2. Developer is looked at like “Oh you couldn’t be a doctor or a banker”

Tom and I went to a pre hackathon intro to iOS Meetup, he helped, i hung around. The turn out was good, lots of newbies, lots of kids, but neither was a demographic for bringing 360|iDev, and sadly, neither is a group likely to immediately be in the market to attend 360|iDev Denver.

That’s ok though, that was part of the trip, and while not opening a new door, it certainly was informative, and I met some really cool folks.

The other part was tourism. Tom had a conference but i was hanging out.

Hong Kong island is pretty awesome. Think LA or Manhattan times 20. There’s no skyline, like those cities have, no visible change from low to high rises. It’s all high rises, everywhere.

We had some really great food (You can see my yelp reviews here). We only had one meal that was completely Meh. Everything else was good or great.

We stayed at 4 different hotels. Mostly out of necessity of our plans. First was the Renaissance. Very nice hotel. With points come privilege, we enjoyed a tasty buffet each morning on the executive level, which had amazing views out to the harbor.

After a few days there, we headed to Sha Tin. Basically a suburb to the north. That’s Where Tom’s conference was. After 1 day we both decided it’d be better if he trained in from Central vs. staying there, so we canceled the rest of the stay at the Courtyard Marriott Sha Tin, and booked at the JW Marriott in Central. I wanted the Renaissance, but they were booked. The JW is of course amazing. For what it costs (I used points) it had better, heck my phone even knew my name. Sadly we were only at the JW 2 nights before resuming our original plan. We wanted to make sure to see the Kowloon side of Hong Kong, so our last 4 nights were at the Mira Hotel. Each hotel was packed with friendly welcoming staff. Each room was very nice, with ample plugs (and the Marriott brands offer complimentary power converters in the room).

Kowloon, is all the worst parts of Beverly Hills, the garment district in Los Angeles, Las Vegas, and maybe 16th St Mall in Denver. High priced, up market stores everywhere, watch stores (by brand or ‘sells them all’) every other store front, every luxury brand had at least 3 stores. Annoying hucksters selling watches or tailoring services, and snobbery and euro trash everywhere. Where Hong Kong was bustling with business and life, Kowloon was bustling with Tourists. The Mira was a very nice hotel, but swank. Lots of mirrors and mirrored surfaces. The in house bar was intimidating chic, and the fancy restaurant was FANCY. The food was good though, and the staff amazing).

We ended up spending most of our Kowloon time, elsewhere. Really just one day was spent wandering around Kowloon. We did go to the History Museum and see an amazing history of Hong Kong exhibit, which went from pre-history to the departure of the British. It was amazing.

Overall though, Kowloon just didn’t have much that was interesting. The Temple St. Night Market was cool, but basically a flea market. Lots of crap electronics, knock offs, and clothing. Lots of food stalls and such.

We did stumble onto the filming of a TV show or movie. Suddenly there’s cops everywhere, and people with their hands cuffed behind their backs, and bags on their heads. It took a second to see the cameras. That was neat. It’s funny that they filmed right there without closing the street or anything. That’s how they roll i guess. 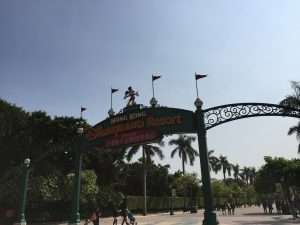 Unless you have extra time in your travel plans, skip it. It was a hair below “OK”. Not just a small park, which it is, but it felt like a pale shadow of a DisneyLand, or even a knock off. We did end up spending the entire day there (starting around 11a) but that was mainly because Tom wanted to see the fireworks display (they sucked).  I was told the plan is to expand gradually and avoid what nearly happened to Euro Disney, makes sense. Maybe in another 5 years the park will be awesome. There’s some HK specific stuff, and the food was way better than what you’d get in Anaheim, but beyond that, really it was meh, at best.

The highlight of the trip was here. The island is insane. Huge buildings everywhere, lots of small food stalls and restaurants. The best meals we had were all in Central, whether well known fancy places or hole in the wall local favorites. Getting around was cake, whether walking (lots of raised sidewalks, and bridges make getting around easy, or taking the MTR or double decker light rail bus thing. Victoria peak, walking along the water, the ICC (with immense Apple store), everything we did in Central Hong Kong was fun. 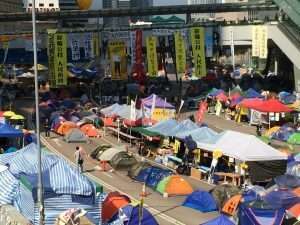 We knew this was taking place, but weren’t sure how close we’d be or what was going on. Turns out we were close. The JW Marriott was in Admiralty where the bulk of the protest was happening, and a few times we walked right past or over (via raised sidewalks) the protest area. It was interesting to see, so many tents and barricades. While we were there the police were getting ready to kick out the groups, and one night a few of them broke through a side door of the gov’t building they were in front of. Overall it seemed fairly peaceful, but we weren’t there when the planned eviction was going to take place.

Just about everywhere I go outside the US and a few places inside (Chicago, NY) I get very jealous of the mass transit options. The only times we took a cab were when there was no train or when we were in a hurry (so, in total 3x). Otherwise the MTR was amazingly useful. Stations are everywhere, connections to other lines abound, it’s the model of what I’d love to see here. Want to go to Boulder from Highlands Ranch? Take a line into Downtown, transfer to the boulder line, done. Fast, inexpensive, easy, low stress.

Even trying to get around with luggage isn’t too terrible, you’re restricted to taking lifts much of the time, which are slow and usually small and cramped, but totally doable.

Obviously miles and miles of subway isn’t an overnight thing, but man, the benefits are amazing. 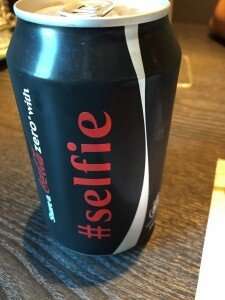 I Debated adding this, I hate generalizing about culture, but well, it was pretty universal in 11 days of being in Hong Kong. For one thing personal space is a non thing, understandably, the residences are small, the trains are croweded, etc. That’s actually fine, especially when I tower over most others, and have weight on my side, I need some room, start wiggling to make space, problem solved.

Selfies EVERYWHERE. Old, young, male, female, they had selfie sticks. Yes that’s a thing, that’s what it’s called. They were everywhere, HK Disney, MTR stations, the street. We saw people on the steps to big buddha primping for a selfie, that didn’t even include big buddha. It was a little ridiculous. I know it’s very well stereotyped (asians love taking pictures) but man it was very supported. We saw people focus so much on the perfect selfie the missed the thing that was happening.

They have no concept of waiting in line. Yes there’s lines everywhere, but it seems totally ok to at least attempt to cut the line. Maybe you’ll get scolded, but maybe not, so they just walk up to lines and try to merge in. It seemed the acceptable responses included saying something (No idea what, but it was never very confrontational) maneuvering the line cutter out passively, which seemed to be perfectly ok, or simply letting them cut. It was very interesting.

So there you go, some random slightly organized thoughts on my two weeks (ish) in Hong Kong. Thanks to my pal Tom for creating the reason to go.

Want to see me live and in person? I'm very personable and some say … END_OF_DOCUMENT_TOKEN_TO_BE_REPLACED