You are here: Home / I am a Consumer / One more Stylus review

So I’ve done a few of these. Right now (and this one may be the one) I’m in love with the Dotpen stylus. It’s really nice! 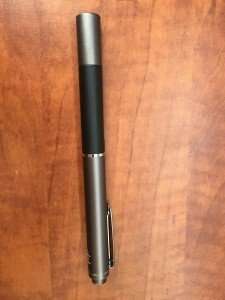 The thing that drew me to it initially was the tip. I can’t stand those big nubbin stylii that have a nub that obscures what I’m doing. My other stylus has a fine point as well, and the Dotpen has a finer point!

On top of the fine point, I liked that the point was protected by a cap, like a pen, and that there was a shirt clip. Not that I’ll be clipping it to a pocket, but in my bag it’s easier if the stylus is clipped in. The cap is a nice feature as I tend to obsess about the fragility of the point. 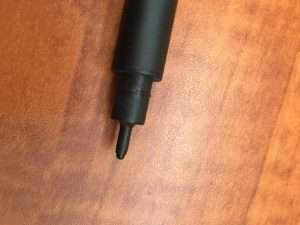 The other plus (yes there’s more plusses than minus’) AAA batteries!!! The thing I hated the most about my True Glide, it takes AAAA batteries. I didn’t even know those existed, and they’re rare enough that they cost a fortune. Well a relative fortune for batteries. I can get a few eLoop AAA’s and be all set.

There’s only two draw backs to this great stylus.

The power button is right where you grip the stylus. I’ve accidentally turned it off a few times. It’s not a major issue as it just clicks on and off (this isn’t a BT enabled stylus, those are nice, but I’ll take universally useful over app by app useful).

The second draw back is a bit more severe. It’s noisy. My True Glide Apex has a soft rubber nib, and the Dot Pen uses a hard plastic. For casual use it’s not really that big a deal, but for taking notes, it’d be a deal breaker. I’ve more or less come to terms with not taking hand written notes on my iPad so that helps, LOL. However the little bit of art doodling I’ve done, it’s pretty clickie. Not terrible, but you’ll notice the sound and hear it.

Noisy nub aside, this is a very nice stylus, and works great on the iPad Air 2. If you’re in the market for a nice fine point stylus that isn’t a “smart” stylus, I definitely recommend the Dotpen

Want to see me live and in person? I'm very personable and some say … END_OF_DOCUMENT_TOKEN_TO_BE_REPLACED