You are here: Home / Announcements / I built an app. 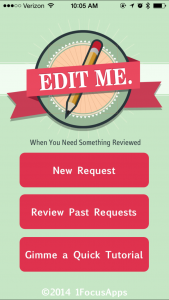 Ok I didn’t. I guess I product managed an app :)

Tom and his team worked with me on “Edit Me“. I’ve helped get lots of apps launched (no shortage of 360|iDev and Flex apps out there, that I helped with), but this is the first “not a conference attendees app” app.

Edit Me, serves a real purpose. Ever had a text message, tweet, Facebook post, etc  that you wanted to run by someone before sending? Maybe you’re a bit too heated, maybe too sad. Maybe just to check your tone, or make sure it’s not wildly offensive, etc. Or just to have a friend proof read it for you. Well that’s what we set out to solve with Edit Me.

The idea is pretty straightforward, i’ve got some short form text i want to run by someone before sending it, (Flying Spaghetti Monster knows I often need it) 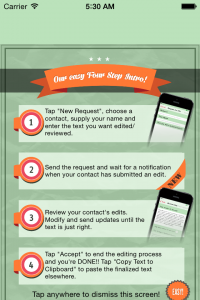 You fire up Edit me, pick your friend who’ll be the editor, throw in a title, and add your text. Off it goes. What’s cool is you and/or the recipient don’t need to register, the exchanges and notifications are bound to device not yet another set of user credentials. When they get the email it’s got an app URL (if they don’t there’s a link to get the app first) and it’ll pull up what needs to be edited.

Something more robust like users may come later, same for more granular edits, right now you offer up your edits and they’re accepted or rejected en masse. There’s no (yet) “Change this word or sentence” it’s “here’s my version of the entire text you sent” even if the change is only one or two words. We wanted to launch what we thought was the most useful version one we could, with plans to do a lot more cool things to the app as we go. 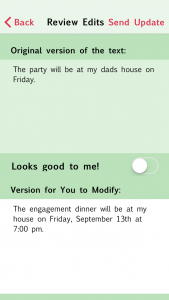 I’m really excited about Edit Me, and find it really useful.

We also want to make a Mac version, which I think is going to be even more useful. While I do often need short form editing/proof reading, I do that a lot more on my mac than my iDevices.

Price: Not free. We went with $.99 because well free isn’t a sustainable model. We think Edit Me has value and utility, and is worth something. Plus really, isn’t not saying something stupid on the internet worth $.99?

NO IAP. While I won’t use the blanket “IAP is the devil” I will say when I am looking for new apps and games, seeing the “Contains In-App Purchase” label makes me think twice before even tapping to see the details. We wanted to make an app that was useful as it is, and requires no extra purchase.

If you’ve ever sat and looked at your messages, twitter or facebook app, and wondered “Should I send this, is mom going to get mad?” Edit Me is probably worth $.99 to you. Because then you could easily ask your sister or friend.

Want to see me live and in-person? I'm very personable and some say … END_OF_DOCUMENT_TOKEN_TO_BE_REPLACED