You are here: Home / I am a Consumer / My First Day with Pebble Time 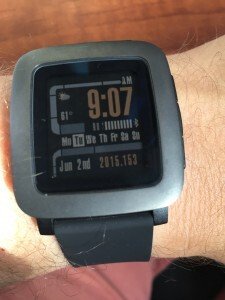 I lingered around the house yesterday before heading out for a work function just so I could get my new Pebble Time. WORTH IT!

I backed the Time the moment i heard about it. No regrets, it’s a nice piece of kit, at least so far in my first half a day ish, I’m really enjoying it as a smart watch.

The screen is (as most tech journo’s have said) not as crisp as say the AppleWatch, but that’s not terrible. It’s all kinds of readable in any light, at almost any angle. That’s a big deal for me. While i love the shake to light feature, I like not needing it very often. 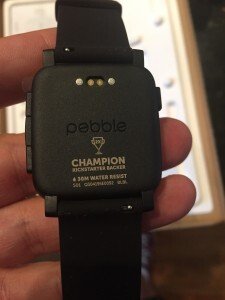 I’m kinda torn on the body. I liked the sleek look of the original Pebble a lot, I suspect I’ll get used to the new style, but I do miss the seamlessness of that first gen. What I do like is the buttons. I like that they’re formed into single line vs. being three distinct buttons.

Also, the new body is definitely eye catching, a friend last night noticed it immediately, and asked what it was.

I like the little “thank you” that Pebble added to the back case for those of us who backed the original as well as the Time, kinda cool, makes mine (and thousands of others) a little unique.

The watch app that accompanies the new Time is much improved over the original. It’s not yet in the iOS app store (I’m running a beta at the time I’m typing this). Hopefully it drops soon, as Time isn’t compatible with the original Pebble management App. That’s a bummer for those who’re receiving their Pebbles this week.

The app itself is much improved aesthetically. You can see each face, a quick tap on a check box and the face is loaded or activated if it was already there. You can even set a default face that is your final destination when pressing the back button. I hated accidentally going past my preferred face to another, then having to click back to it, so that’s nice.

Depending on the face you can manage it’s access to the time line feature that’s new to the Pebble OS, you can also more readily access any settings that might come with that face. 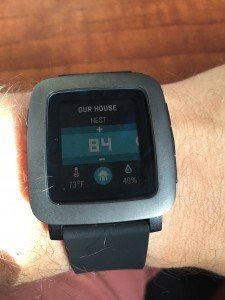 You can also allow access to calendars, and such, which then let’s your appointments flow into the time line. Handy for sure.

Apps are still a thing, and I’m sure it’s just me, but they feel more accessible, maybe it’s the upgraded storage. On my previous Pebble with only 8 “slots” most apps despite their utility competed for space with faces and other apps.

Apps like Leaf now feel easier to use and access, where i used to have to remember i had an app, it’s already second nature to think about it. Maybe because it’s summer and Denver skipped spring and went from cold and wet to hot, so I think about my house temps more, I dunno.

I’m excited by the potential for smart bands, I hope folks take advantage of that feature. Adding battery, sensors, etc via watches adds so much utility to the Pebble Time. Also open sourcing the files and letting the community get involved, shows a lot of love and respect for their users from the Pebble Team.

I’m very happy with the Time already, and envision a long run with this as my daily driver watch, sorry watch box, you’re going to have to wait a while longer.

Want to see me live and in-person? I'm very personable and some say … END_OF_DOCUMENT_TOKEN_TO_BE_REPLACED