So i just finished my big event of the year, 360|iDev and wow. What a rush (as always).

TL;DR; So honored to share a room with so many awesome people being awesome. Making amazing things, being parts of amazing teams, etc. I honestly feel this event not only has a positive impact on my life each year, but also does on others, which is humbling to say the least.

I start planning 360|iDev the moment the preceding event ends, so yes, I’ve already begun work on next years event.  A 4 day conference with 55 speakers, 400 attendees and a handful of sponsors isn’t something that comes together in a few weeks.

There were a few good, and one bad thing this year. One of the things I like about doing 360|iDev is that we bring about 400 people into Denver, more than 85% of whom aren’t local to CO. Many who aren’t local to the United States. Sure when compared to city wide events, that’s nothing, but to me it’s a big damn deal.

360|iDev is my bread-n-butter. It keeps enough money coming in, my wife hasn’t forced me to get a job… yet, LOL. I get to see people from around the world that i may only see once (maybe twice if I’m lucky) a year. I get to show off my home town (by claim, if not birth), and show everyone why Denver is so awesome, why it’s where I’m where I am.

There was a lot of great stuff this week, much of it conference specific, so I’ll talk about it on the conference blog, but some of it more personal and Denver specific.

Last year we ate lunch outside the hotel because yeah $50/person for conference lunch is stupid and well hotels are often stupid. One place however can’t handle 400 ppl, no matter what they think or say. Lunch last year wasn’t awesome. Long lines, long waits, etc. As experiments go, it failed.

This year I had 3 (4 on Tuesday because of Civic Center eats) options for attendees. Lunch tickets were available for each place, people picked what they wanted to eat. It was awesome to see groups form on the fly each day to explore someplace new. We spread the lunch tickets, so no single vendor had more than 150 people a day. So far (bills are still coming in) it looks like i spent half as much this year as last, and had 3x more options for people. That’s awesome!

The only thing that went a bit sideways was my failure to account for vendors not being open on weekends. Out of 3 only 1 was open on Sundays. Oops.

One of the things being downtown has afforded was the opportunity to spread some money around vs. bottling it up in a hotel chain. This year we spread about $18,000 to local restaurants in the downtown area. I think that’s pretty awesome, i know i’m not a rain maker, but i think any time I can give money to local businesses, that’s a great thing. Not only am i not paying for over priced hotel food, but I’m boosting (in a small way, sure) the local economy.

While small, i think every dollar helps. I think as a conference organizer, it’s my job to not just dump money into the pockets of a massive hotel chain. It’s my job to better the city that is hosting my event. Whether that’s financially or even just from exposure like not keeping everyone indoors all day and night.

During lunch on Tuesday, the attendees ate lunch at Civic Center Eats. A few attendees were enjoying their meal on the grass when some Denver PD officers came over. Sadly instead of assuming these folks weren’t criminals, vagrants or some type of malcontents, they treated a group of international visitors to Denver like criminals, demanding they all present ID while telling them they were sitting in the wrong grass. Not cool Denver PD, not cool. I get we’re trying to revitalize the grass in the park, but maybe wrap that section in tape, vs. the handful of tiny ass signs. Also maybe, just maybe assume people (wearing conference badges, even!) aren’t trying to kill the grass or break the rules and start with “Hey guys, can you move elsewhere, this grass is off limits for now.” vs. oh i dunno, accosting people eating their lunch, making them all present ID before letting them go. 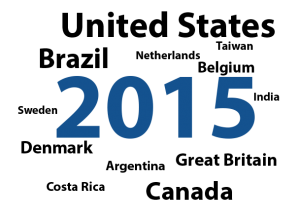 As someone who brings people from around the world to Denver, i’m not super thrilled that happened. Small incident, yes? bad experience for people in Denver the first time ever, yup. In the end we all joked about it, but is that really what Denver wants people to remember about it?

I have much respect for law enforcement, I know their jobs are hard, but that’s not an excuse. Be better please Denver PD.

If you’re one of this years’ attendees, thank you, really, truly, thank you. Being able to do this event, and make even a small living is huge! I can’t thank every single speaker, sponsor and attendee enough for being a part of something so truly amazing. Conferences are hard, harder still when balancing making a living, with making an awesome experience. I already can’t wait until next year.

Want to see me live and in-person? I'm very personable and some say … END_OF_DOCUMENT_TOKEN_TO_BE_REPLACED