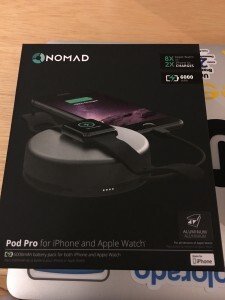 This might be the perfect travel companion for iOS device owners. The Nomad Pod Pro. Love it!

Mine came the other day and I’m excited for my next trip, which sadly since it’s winter and camping/conference season has more or less wrapped up, but we’ve got a long road trip, might be a good test.

Never the less, this thing is cool.

You supply the watch charger, and for mine I just bought the shortest cable one Apple has, but there’s enough room to wrap a much longer cord if that’s what you’ve got. You pull the top off, held on by really strong magnets, wrap your Watch charger around it, and set the base in the center, then pop the top back on… MAGNETS!

On top of being a nice portable watch charger, it’s an iOS Device charger too. a 6,000 mAh battery gives it enough juice to charge your iPhone 6 and watch, 2x each (per the marketing copy). While in most scenarios my watch lasts all day easy, there’s been at least one time so far (I’ve only owned mine about 2 months so far) when something went sideways and drained the battery to 0 in about 5 hours. Charging your phone at dinner, not a huge deal, happens a lot, 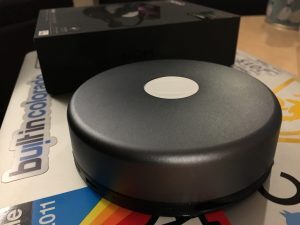 easy to be inconspicuous. Charging your watch at dinner, … less so. You can’t wear it and charge (I tried), and you can’t just shove it all in a pocket like you would a charging phone since the charger magnet isn’t nearly strong enough for that.

While I hope to never again have to charge my watch at dinner, at least this thing isn’t ugly and is pretty compact and easy to use.

This will likely replace my EDC battery pack, since most of my charging needs are iOS devices and the built in lightning connector makes it perfect. I’m not sure if I’ll fully commit, but I could certainly reduce my cable and battery carrying with this device. If you charge lots of older iOS stuff or non iOS stuff you’re kinda SOL. The Nomad has 1 port, micro USB to charge it’s battery. The lightning connector is built in. In a pinch you could open it up and plug something other than a watch charger into the USB port inside the unit, but it’d have to be desperate times for sure. 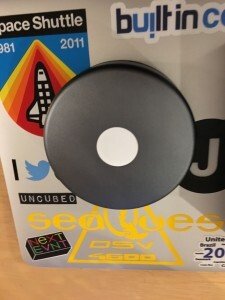 All that said, where this will really shine for me, is camping. A friend asked my thoughts on Pebble vs. Apple Watch (when i had a Pebble) and my only caution was at least with my Pebble i charge it up and have no worries that a 2-3 day camping trip won’t dent the battery.
This will work just fine next to the sleeping bag charging the watch at night just like at home. Keeping my watch and my iPhone charged when camping, while not life or death certainly is nice, and this will make it that much easier, and be that much less I don’t have to bring with me.

So yeah I’m pretty excited for this thing.