You are here: Home / I am a Consumer / My thoughts on Apple CarPlay, part one 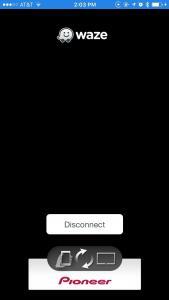 So for part one, I wanted to just cover some initial impressions.

So CarPlay as it’s own thing is fine, but since Apple has no control over the head unit manufacturers (I actually think an “Apple Car” is more likely to be an Apple head unit) there’s a load of crap that makes everything janky.

Pioneer, being just like every other OEM, has their own thing, AppRadio. I’ve no idea what AppRadio is, because it doesn’t seem to work.

Despite it’s taking up a valuable icon space on the first screen of the CarPlay home screen, every time i tap it, it crashes the CarPlay 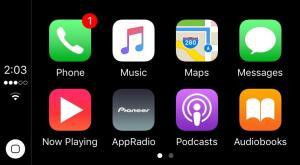 interface. Why Pioneer made their own thing, I can’t guess. Why it can’t be deleted or removed, I can totally guess. Why it seems like it should work, but doesn’t, who knows, this is why OEMs shouldn’t bundle their crap into things.

I found a setting in Waze (My Navigation app of choice) that said something like “let app be controlled by car unit”, weird but ok let’s see.

Turn on the car, connect the phone, launch Waze, and …. nothing. Both of these images are the screen shot of what I was seeing on both screens. Waze on my phone seemed to know it was connected and talking to something, but the head unit had no idea. Tapping that nice little AppRadio icon, crashed the interface. Assuming it’s an AppRadio thing, since Waze was like “Oh hi there Pioneer”

Apple Maps is ok, and I use it because it’s what’s there, but I’d kill to have Waze back. Knowing where cops are (or were) is of immense value. Knowing where there’s a road closure… Uh yeah!! Technically Apple Maps has that but it’s crap. “There’s a hazard ahead” that’s it. No details, no icon to tell me, just a hazard, good luck.

I could run Waze by running it in the background, and might resort to that since it’s voice announcements still seem to go through the car speakers. The reason it’d be in the background is that CarPlay is just a special type of mirroring your phone screen. Hit that cute little home icon, if your phone screen is on, the phone (and head unit) return to the home screen. Launch Maps, it launches on your phone. Launch Pandora, same thing, you see where I’m going.

If i pick up my phone, hit the home button and launch an app that isn’t CarPlay friendly, the head unit stays on the home screen. The moment i launch something from the head unit, whatever the phone was doing is replaced by what the head unit is doing. I think i get why, mostly, but it’s also annoying in many ways.

I started to write a single post about CarPlay but figured I’d break it down since there’s so much to talk about. Enjoy this one, I’ll post more in a bit.

Want to see me live and in-person? I'm very personable and some say … END_OF_DOCUMENT_TOKEN_TO_BE_REPLACED