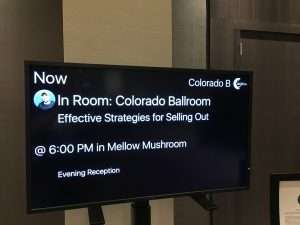 So I wrote a while back about Conference signage, and what my “version 1” looked like, and where I wanted to see version 2 come in.

Turns out V2 came sooner than expected. The awesome team at Essemble, who built the conference app, were able to quickly work up. rough version 1 of a conference signage AppleTV app.

It wasn’t fancy to start, I have a few things I’d like to change for next year, but overall it was awesome. Of course training people to look at this vs. the crappy little monitors hotels install outside conference rooms might be a bigger challenge than I expected. 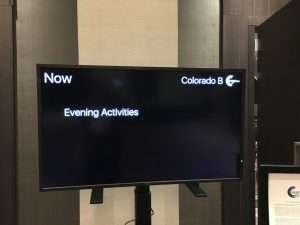 Each room had a large monitor out front, and an AppleTV. The app had a list of rooms, you selected the room the TV was in front of and that was it. The app polled the server that drives the conference app, so any changes I made to the schedule in the app, were reflected almost immediately on the screens. Certainly faster than I could update the website.

As a first cut of this, done in … I think 2-3 weeks at most, I’m thrilled. The information I wanted to present was presented. I didn’t have to print out session signs for every session in every room, and have volunteers running around to change them. I was able to quickly move sessions based on capacity, and everything I needed to reflect those changes, did so quickly. 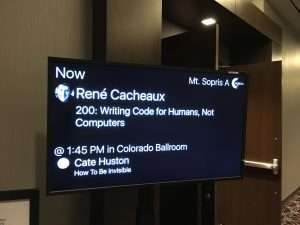 There were a few hang ups, the way the app pulled data left the previous evenings listing until 15 minutes before the next mornings event, vs. starting wth the first thing that day. Not a big deal, and easily addressed.

I loved that general sessions were able to be called out as basically “Not in this room” so anyone walking in, not only knew it was a general session, but where it was, and that it wasn’t in the room they were standing at.

I’d love to have them run in portrait, mostly because hotels don’t have small screens, and nearly 50″ is a lot to have sitting there in landscape. Not a deal breaker.

I’d love to have a bit more styling on the display, maybe using the header image for the event along the top, or as a full background, again not a deal breaker.

Down the road, a bit down the road, I’d like to own my own displays (probably smaller, 46″ was nice, but I felt it was a bit overkill) so I have more control on size, and placement, etc. but even using hotel kit, it worked out great.

I’d love to make conference signage more valuable and realistically more trustworthy for attendees. Hotels have small monitors that they use, but those changes aren’t in my control, they’re scraped from the schedule and any changes require emails to be sent, delay, etc. Updating the website is something I do as we go, but it’s also not as fast as simply changing the data the app uses, and not just updating the app, but the room signs at the some time.

Want to see me live and in person? I'm very personable and some say … END_OF_DOCUMENT_TOKEN_TO_BE_REPLACED