You are here: Home / community / Another Denver Startup Week in the bag! 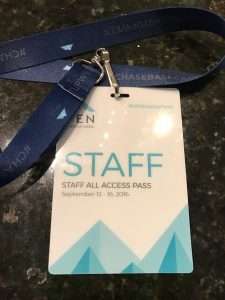 Welp, that’s that, Denver Startup Week 2016 has come and gone. I’m still tremendously proud to work on this event. It’s a ton of fun (and some stress, and head shaking).

This year we set another huge milestone having over 13,500 people sign up for the week. That’s amazing.

I had the honor of being the headline events chair, and as always we packed a lot into a week, and this year the week was only 4 days for me.  We decided to move the closing bash to Thursday night, which based on attendance was a great idea! It was epic! Far busier than previous years when it was on a Friday.

The Job fair this year saw almost 2,000 people show up to hang out with and talk to 70+ Denver companies all of whom were hiring! We had a ton of awesome sessions on diversity and inclusivity in tech, which is still so greatly needed! We hosted an awesome event with HBO/Dish to bring Silicon Valley to Denver

Overall the entire week was awesome, over 300 events all over the core of Downtown Denver. Tons of great stuff happened at Basecamp by Chase, where I spent the week, working. It’s nice to not completely have to stop work on my stuff during DSW.

If you didn’t participate this year you should sign up now, so you’ll know about next year, and then you should make sure to book out some time. Whether you work for yourself, or someone else it’s a great investment to get out and enjoy what Denver Startup Week has to offer.

I’m so proud of what Denver is becoming. There’s growing pains for sure, and I hope we address them, but watching the city I’ve chosen as home grow and become a world class city is amazing!

See you next year!

Want to see me live and in-person? I'm very personable and some say … END_OF_DOCUMENT_TOKEN_TO_BE_REPLACED