I had a pair of bluetooth headphones ages ago… It’s hard to remember how long but It was around the time of the iPod Photo/color. That’s what I used them with in fact.

Comfort was not high on their list of things to be, they weren’t very comfortable, in fact they hurt to wear for more than 2 hours or so.

Knowing what’s going in it kind of a big deal to me, they were a PITA to charge, or rather to know when to charge. There was some combo of light color and blink rate that would tell you the status of them; connected, battery low, etc.

The finally fell apart about a year into owning them. I never replaced them.

Well whether I want to or not Apple is forcing my jumping back into the bluetooth headset pool. I didn’t have to rush, they kindly offered what’s likely to be the first of many Lightning to 3.5mm adapters I’ll own (I’ve already nearly lost mine more than once). That said, while the adapter is nice, it’s already frustrating. “Where is it?”, “Did i leave it at the office?” etc.

I have some nice headphones a friend bought me, so those will likely warrant keeping the adapter around, but for runs, I’m convinced I’d rather not deal with the hassle of the adapter, and honestly no cords would be nice.

I picked up a pair of Plantronics Bluetooth Headphones

, they had high marks on amazon, better than many more well known makers. Plus it’s Plantronics, while not a sexy brand, they’re no slouch in wired and wireless headsets market, so I figured they know what they’re doing. The long battery life they claimed was also a nice feature.

For regular workouts I’ve always used an iPod shuffle (I even found one in the street, when mine started to die, yay me!) but I think with a nice pair of Bluetooth Headphones

I’ll likely just use my iPhone for workout music. One less device to sync, and charge. 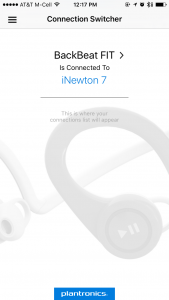 Ok so this morning was my first run with this headphones. Here’s my thoughts.

The packaging was lovely; very nicely done and easy to open.

Once you get the headphones connected (quite easy, paired on the first try) you’re asking to download an app. I’m not a huge fan of apps for single uses, etc but this one is well done for what it is.

There was a firmware update, which this app handled and got me up and running. It’s now in my “useless ?” folder for things I need for very limited purposes. I’ll probably never need this app unless they update it and it has a new firmware. Oh well. 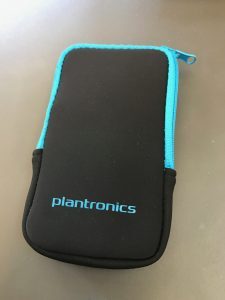 Thought this was just a useless carrying case

The headphones come nicely bundled in what looks like a weird sorta pointless carrying case. It was just the headphones, and a USB cord for charging.

But then i noticed what looked like an armband INSIDE the case. A few minute of fiddling with it and BOOM! 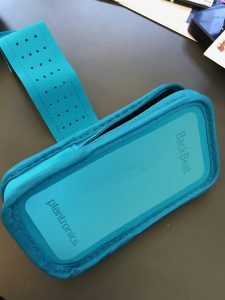 I don’t know if I’ll use it as I prefer my phone on my fore arm, and I prefer to see the screen, use the onscreen controls.

Though it could be a nice pouch for storing things, we’ll see, pretty sweet idea Plantronics.

My first run felt weird, I’m so used to a cord flapping around and getting tangled on my hand, it was a bit disconcerting at first. That said I got used to it fast, and it’s nice.

The headphones have plenty of volume, but you can hear cars coming and such, which is great obviously if you’re running somewhere with cars. I’m a fan of not losing situational awareness.

Sound quality is ok. I’m going to have to experiment with where my phone is (was on the inside of my fore arm this time). Other than the occassional burp of static, the audio was clear. On some songs it was hard to tell if it was the song or the headphones. Not a deal breaker and possibly just situational until i find the right arrangement. Certainly I wouldn’t want that while I work, but as these are for runs and work outs, it’s not really an issue.

Not that I expected to, but I was pleased I never once lost connectivity, and even with the random crackle, it was never more than a second, and never interrupted the music or anything.

The headphones themselves, have some nice features. The voice prompt is to be honest lovely! Power them up, “connected, X hours of listen time” is the first thing you hear. A tap of the power button gives you an update on expected listen time, and battery percentage. Very handy at the end of a work out so you don’t screw yourself the next day.

Oddly (unless I don’t know what I’m doing) the volume control is only up. Not really an issue as I like my phone accessible for skipping a track and volume anyway. The Siri integration is nice, i haven’t played a ton with that but suspect a hold of the “phone” button and i could just ask Siri to skip a track”

The buttons feel nice, it doesn’t take much pressure to trigger them, which is nice since it’s sitting in your ear and all, no need to hurt yourself.

Overall, I’m quite happy with my Plantronics Bluetooth Headphones

and expect to enjoy these headphone for some time. At the price, they’re hard to beat!