You are here: Home / I am a Consumer / Apple Carplay is so close

For my birthday i got a Pioneer head unit that brought carplay to my car.

It’s nice, it really is, but there’s much room for improvement. SO. MUCH. In fact this post was started months ago and now having lived through a few OS releases, my opinion is less.

I’m beginning to wonder if CarPlay is an AppleTV like hobby that will live on in a meh state for years.

better siri integration. I was already happy with shouting “Hey siri” over the radio, sometimes two or three times. Now there’s a dedicated mic that listens way better than the mic on the phone where ever the phone might be, and can silence the radio, pause podcasts and streaming music, it’s definitely better.

Pandora, iheartradio, and other sources of music. This isn’t carplay exclusive, but for me, the car was too old for anything more than taking calls over Bluetooth, so now I’m not limited to radio, and it’s liberating! Now if only the apps worked. I upgraded my TuneIn account then promptly wasted 7 months of paying when TuneIn vanished from CarPlay. It’s back, but pretty much sucks. I can’t access favorites, so have to listen to a station on device, so it’s in the “recents” list. iheartradio and Pandora both work much better.

Podcasts and audiobooks. Also not exactly exclusive to carplay, but i detest dongles and other extraneous connectors, so i never had access to either in the car, until now. I’ve removed (thanks to iOS 10.something) the audiobooks app because I prefer to read books, not listen to them, but my podcast consumption has increased now thanks to CarPlay. Our next cross country road trip will be tremendously more entertaining and informative. 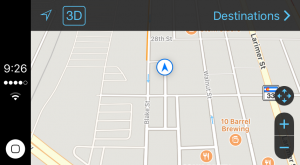 Maps (also a what’s not awesome). The view isn’t very rich, and well apple maps is kind of meh, but nav is nice and the directions and such are adequate.

Maps. Why on earth Apple Devs think this makes sense is lost on me. About 50% of the time, the maps app launches with the “follow me” option off, so the next time I glance at the screen, my arrow is nowhere to be seen. THere are so many seemingly obvious solutions to this.

I get that sometimes you want to pan the map around, but when driving, I feel like it’s a safe bet I want to see the map following me.

Well in this case, being limited to maps. I love Waze. I’ve been using it since it launched. It’s a great app, crowdsourced data is amazing (especially road hazards and police). Apple pulls waze data in, but not all of it, mostly just traffic/congestion data.

Apparently waze doesn’t care about losing carplay users, since when asked about carplay, this was the response.

Well it was fun, but I’m not going to use an app when now my head unit can take care of it. Heck the iPhone mount on the dash is already gone. Thanks for all the fish Waze.

Apps, or lack thereof. There’s just not many, and that’s a bummer. I don’t want angry birds, but it’s a shame apple isn’t encouraging communication, music, etc apps to all roll a carplay add on in. Dash would be a great example of an app that would make sense on CarPlay. Nowhere to to be seen.

I know carplay is still relatively young, most makers are only now in model year ’16/’17 including OEM support, but I worry Apple will do what they often do with things that require third parrot support; build it, expect others to just adopt it, and watch it flounder.

Carplay is ok right now, not amazing, not terrible. I like my new headhunt (Thanks Tom!) but there’s so much more potential. If someone were to ask me if the upgrade was worth it, my answer right now would be, “not really”. A new car with CarPlay, sure, but going to the trouble of an aftermarket upgrade, I’d wait unless the head unit is cheap.

It definitely did give my car new life. I can connect over bluetooth (not at the same time as being wired) and play music, make calls, etc. More than one person can connect, which is nice, but for the costs involved, the gains aren’t that amazing.

Want to see me live and in-person? I'm very personable and some say … END_OF_DOCUMENT_TOKEN_TO_BE_REPLACED