I’ve had a standing desk for a while now, I have had one at Uncubed for years, but when Nicole and I decided to redo our home office (we both primarily work from home) I wanted us both to get standing desks.  In the way back it was easy, Geek Desk was more or less the only/main game in town.

Now however, there’s no shortage of options, and opinions :)

As we do now, I started by asking around on Twitter and Facebook. Many chimed in with what they use, or what they’re looking at for themselves. Rarely did anyone recommend the same thing as anyone else, until (IIRC) two people mentioned the Jarvis.

Then someone pointed me to this awesome blog post. Which quite literally saved me a good couple weeks, by doing most of the research I would’ve done. Dave’s post is immensely thorough. The only thing missing was IKEA’s entry into the game, which didn’t matter as it was out of the running for me, based on the size of the table top.

Fitting one standing desk in a home office is easy, two adds some complexity. Table top size, how close we’d want our desks (if they were going to be side by side), etc. is a big deal, as is leaving enough room after two desks are in it, for us and our dogs, and the various other things that go in the office.

After reading Dave’s post, and knowing my experiences with Geekdesks at my office (which I liked, but were still a pretty hefty price, and basic), we went with the Jarvis. The Bamboo top has actually been a Wirecutter favorite for several years, and ranked high in Dave’s own research. We didn’t get the bamboo because neither of us like wood grain as a look. 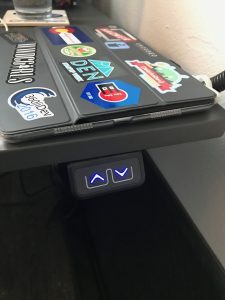 The nice thing with Ergodepot (now Fully) is that you pick and choose what you want, including grommet placement. Nicole wanted a grommet in one place, I opted for another, so it was nice neither of us was getting a one size fits all standing desk. Beyond that you can choose from regular controls or the fancier memory ones, can add all manner of things to the desk. We went pretty bare bones.

One thing I like a lot, is that the controls (Up/Down) are lit. and the control is slightly angled. It’s just more visually appealing than geek desk controls.

For those interested, specifically we got for our standing desks: 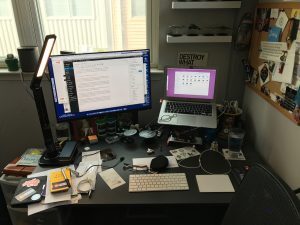 Grommet in the center for me, left corner for her (looks like that’s no longer an option which likely addresses my one CON). Now you can choose two grommets (left and right corner) or no grommets.

I already had some extra IKEA under desk stuff holders, so opted to not get the cable management option. Ditto pencil trays, lamps, etc.

Standard up/down switch. Memory seems nice, but it’s not that hard to do, so….

The one thing that drove me a bit batty, was the wait. I’m just not that patient when ordering things (Thanks Amazon). From order to ship, the frame was the next day, the table top was a week later, via UPS ground, which added another week. The delay likely due to the (no longer an option) grommet placement.

If I were in the market right now for a standing desk, I’d buy a Jarvis in a heartbeat. Nicole and I both love ours.

Want to see me live and in-person? I'm very personable and some say … END_OF_DOCUMENT_TOKEN_TO_BE_REPLACED