You are here: Home / Technology / Thought on My First week with Google Wifi

I just switched out my Apple Airport Extremes for Google Wifi

. I’m normally all in on the silo I’ve chosen (Apple usually). I’ve had Apple Airport Extremes since the second generation of them. They’ve never been the best devices, but again the silo. They worked remarkably well within the Apple ecosystem. Mac and iOS would see APs that needed setting up, etc. Easy. The app was nice enough.

Updates were few and far between, barely a scrap of pro user support, or more modern considerations, but they worked and managing them was easy enough from a non shitty app. 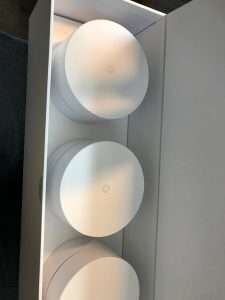 I’ve been keeping an eye on the emerging Mesh Wifi world, and saw this review. Wirecutter has a great writeup as well, but it didn’t cover Google Wifi

and a few others, because they hadn’t shipped yet. One of my main things was it has to look not terrible since at least one will live in plain sight. Apple kit sets the bar high there.

Setup is pretty straight forward, and you can read all about it in the blog post linked above, so I won’t re-hash that. One thing I’ve learned in keeping up a home network, changing your network name is a big pain in the ass, so don’t unless you need to. Prior to booting the first Google Wifi up, I powered down the AirPort Extreme. Then as I went through the process I named my network the exact same name as the majority of devices would look for, and made sure the password was the same. Most things just reconnected no problem.

The one hassle I had in this area is that Airport Extremes let you treat your 2.4 and 5gHz networks as separate things, so I had “Wilker” and “Wilker 5G”. This was also my own thing, since it made sure my machines connected to the faster AP that was was serving 802.11ac and the slower b/g/n wouldn’t slow down the ac connections. A hold over for sure. The downside was that the device that would be the biggest headache, were the ones on the “Wilker” network. iDevice switches and the Sonos speakers. Things that don’t have a UI to interact with. Long story short, lots of resetting and reconnecting later, everyone is happy on the new and improved “Wilker 5G” network. 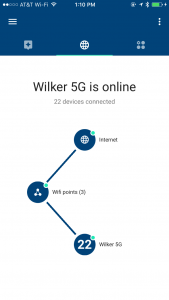 While I like the app, it’s clean and pretty easy to use, it’s also the only way to interact with your Google Wifi. No desktop app, no (blech) web interface, sadly also no iPad app. Phone only. Deal breaker? No, but a pain sometimes when I’d rather use my iPad.

It is nice to be able to see my network like this, it’s one of the things I liked with Apple’s Airport Utility. This is even better since I don’t have to look at each device to see what’s on the network. They’re all listed regardless of which AP they’re talking to, very nice.

I’m not sure of it’s overall utility, but the idea of a priority device is in the app. 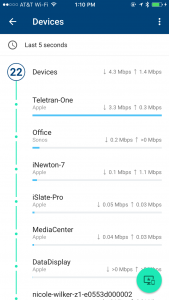 When looking at the list, you can tap that little green circle in the bottom right, and assign a device on your network priority traffic for one, two or four hours. I’m not sure why I would care do to that. It might be useful to do it indefinitely for say my media center, or the AppleTV to ensure streaming is always good, but I can’t imagine having to every few hours, pick who gets priority.

The other really nice thing in the device list, is seeing the data usage. You can see it in the list, and tapping on a device let’s you see that devices traffic either real time or back a few days/weeks/months. Kinda neat. 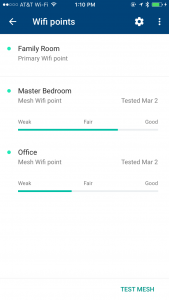 I’ve been interested in mesh since I started reading about. The idea isn’t new, in fact I’ve used my previous generations of Airport Extremes in a mesh setup, but it’s much more manual and labor intensive to setup and manage. Google Wifi makes it much easier!

I do wish you could wire additional base stations to help spread the load down through the modem, but not a deal breaker.

The hardest part of set up was placing the units. Our house is a rowhouse, tall and skinny. My first thought was one unit in the office closet where the Airport Extreme was, then one upstairs at the entry to the rooftop deck since usually internet up there is the pits.

Except as you can see, the office closet isn’t a great location, I suspect because the washer and drier are right in line between the main google wifi unit and the office one. I’ll play with location later.

The rooftop one right now is in the master bedroom, straight down the hall from the office. The Unit gave an error, when on the roof. I’m not sure if it was just a fluke or if all units need to be close the main unit (which goes against my understanding of how mesh works). Will play with that one as well later.

So far so good. All devices are connected and doing well, internet speeds don’t seem any different, things stream well, etc. These are smaller and more discreet than Airport Extremes which is nice. We’ll see how Google does as far a feature updates, etc.

One update, I had a weird google service issue the other day. I don’t know if it was google DNS, or their servers or what, but it directly impacted the google wifi since the app talks to their servers as well, quite frustrating.

Want to see me live and in-person? I'm very personable and some say … END_OF_DOCUMENT_TOKEN_TO_BE_REPLACED