You are here: Home / Business / Starting is the Hardest Part of Writing

I’ve no idea what other writers do to get started on their writing, but for me, it’s a multi-step thing, before I ever start to type. Space Rogues is the only exception to this post (And yeah that means only 2 data points, inclusive, whatever). That was created, as I’ve said many times, without a plan of any kind.

That said, Space Rogues 2, and now 3, both started like this: 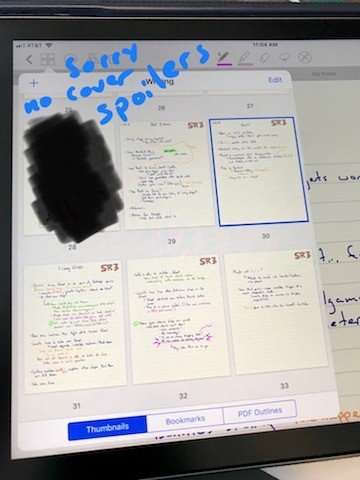 I start with my iPad and Goodnotes (my all-time most highly recommended, favorite iPad app). I start with just jotting down ideas; Questions about plot points, or existing loose ends I might want to tackle. Sometimes an idea will come in but isn’t a whole book, so it’ll get a little note about maybe it’s a subplot.

As I go through that exercise, usually a particular idea or two bubbles up to the top, so I start to dig into those, roughly expanding them by major points to see if there’s a story I like in there. I’ll expand on things, make notes about what it would look like, etc.

I don’t go very deep, that’s not my goal here. Instead, I just want to see what I think of the idea, how does it play out.

As you can see it’s only a total of five pages, and the first one is just broad ideas, the second is things I want to make sure the book has, but not tied to the overall story. So really just three pages of drilling into an idea to see what I think. I figure if I get this far it’s the story I want to tell.

From there I fire up Dabble and begin plotting out my idea. This takes considerably longer. It’s still not a scene by scene outline, as I’m just not that kind of writer, but it’s one level up from that. Every major plot point or bit of dialogue I want to make sure to get in is captured.

This part takes more time, I try to capture what’s in my head as best I can so i end up with many many cards.

After all this, I open Scrivener. (Spoiler alert, I haven’t opened Scrivener yet… But soon)

Want to see me live and in person? I'm very personable and some say … END_OF_DOCUMENT_TOKEN_TO_BE_REPLACED