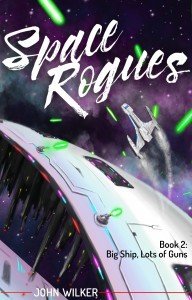 That’s it! That’s the title, and this (Over to the right) is the cover!

I’ve been typing (It’s a working title) for so long it’s almost second nature. Gonna take some getting used to not using it now, well for book 2 that is. Book 3 is officially underway so, you know, plenty of fun potential titles to come there.

This cover though. An old friend who I used to see all the time via 360|Flex did the artwork. We traded a lot of emails going over my initial “here’s what I’m thinking”. I sent two really crappy doodles (you’ll have to get the book to see them, they’ll be included in the back). One, the one he chose had a scribble, ‘big ship, lots of guns’ because I suck at drawing and that was easier than trying to draw it. From there we started to flesh the idea out.

We went through a few versions, and kind of hit a wall. Finally, we agreed that the Ghost wasn’t the main point of this cover. in early versions, it was dead center and we were trying to wrap the rest of the cover around it.

I’m really happy with this cover, and the title! I’ve got a ton of material showing the iterative process that will all be in the back of the book (at least the ebook, not sure about the print edition)

Want to see me live and in person? I'm very personable and some say … END_OF_DOCUMENT_TOKEN_TO_BE_REPLACED