You are here: Home / Every Day Carry / Jumped Ship on the Apple Watch

So for a while, I’ve been toying with abandoning the Apple Watch. I made the attempt a few months back at wearing it on my right arm as an activity tracker. The experiment was short-lived, it just wasn’t very comfortable.

So I went back to wearing the Apple Watch as my daily watch.

But still didn’t love it.

I hadn’t used any apps on the watch in, well I can’t recall how long, it was basically doing two things: unlocking my Mac, and acting as an activity tracker. For the former, it was fine, for the latter, however, it sucked. I couldn’t track my sleep since I could never create a habit to charge the watch around mid-day.

A while ago at a conference, a bunch of us were around the table for lunch and someone looked around and said, “Would anyone here recommend the Apple Watch?”

To a person (I admit, not a huge sample) all of us shook our heads. We admitted it was a neat gadget, but none of us had a killer use for it. We all just shrugged and were like, “If you have a spare few hundred, get one, otherwise, meh.” 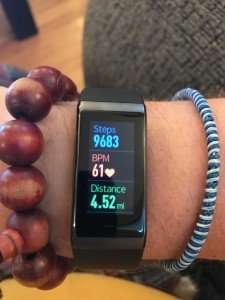 I picked up an Amazfit Cor

It writes to Apple Health, which was my primary want. It lasts over a week on a charge, and can automatically log sleep quality. It was $79 and I can wear it on my right wrist, freeing up my left for one of my beloved watches. Win-win.

The Apple Watch sets a high bar to be sure, and the Amazfit doesn’t quite hit the bar, but then I remind myself, that while the Apple Watch was quite an awesome fitness band, a lot of the stuff it did was ‘extra’.

Rings are cool and a great way to motivate but not essential.

I do miss being able to log any exercise directly to Apple Health, I’ve had to go back to using multiple apps to log things, and haven’t found the “perfect” solution… yet.

I’m exploring various apps and routines to get a workflow dialed in, but so far I’m very happy with my decision.

Want to see me live and in person? I'm very personable and some say … END_OF_DOCUMENT_TOKEN_TO_BE_REPLACED