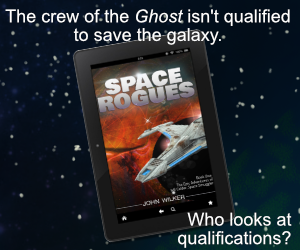 The Ghost is getting a Makeover

Technically she got one already for book three. The awesome Ian Bristow rendered up a ‘new and improved’ Ghost for that book cover.

I love Ian’s take on the Ghost.

One of my big plans for this (and the end of last) year was consolidating the look of the Ghost. For the eagle-eyed among you, she’s changed looks with each cover. That’s largely because each cover has been created by a different artist, which is kinda cool in it’s own right.

That said, I love consistency

My grand plan moving forward is to have amazing backgrounds for each cover, but the Ghost be a constant. We’re getting there.

I’m working with the awesome Sean Tourangeau On the next iteration of the Ghost. Above is the first WIP he’s sent me. To say I’m in love might be an understatement. There’s a few tweaks, we’re still super early in the project, like he started last night, early. The Ghost doesn’t have a cockpit, and I forgot to tell him how big she was, so I did, which should change a few things as he works.

My plan, is to get several angles of the New Ghost and re-release books 1-3 with her on the existing covers, plus have assets for blog posts, and the like.

Would love to hear your thoughts on the Ghost and this new direction.