You are here: Home / Around the Home/Office / Taking Notes When/Wherever 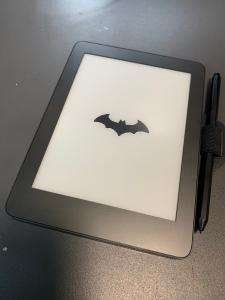 I’m a sucker for a gadget. With that out of the way, I’m also a sucker for writing things down. I’ve notebooks everywhere, but am not a fan of them. I’ve moved most of my note taking to my iPad and Goodnotes (Great app!)

But I don’t carry my iPad around all the time.

I tried carrying a Fieldnote and pen, didn’t love it.

I got an awesome looking leather bound notebook, that looks awesome and kinda old-timey archeologist, but it’s a bit heavy, and I forget to grab it a lot.

Then I stumbled across the Mobiscribe.

It’s about as basic a gadget as you can get. 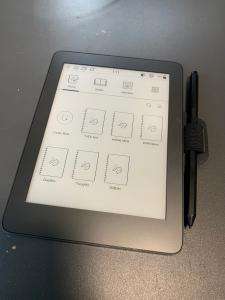 It doesn’t ship with an email client or any social media apps. It doesn’t even come with the Google Play App Store (You can still install apps, but it’s hit or miss on which will work with this older version of Android and an Eink screen.)

Which is great. It ships with a notes app, a book reader, and a (Completely useless) calendar app.

The book reader is meh. I installed the Kindle app in case I end up somewhere without my actual Kindle.

The notes app, that’s the gold. That’s the reason I bought this little toy.

I can quickly grab it, wake it up, jot down a ToDo or a note about whatever book I’m working on, etc. I could use GoodNotes and my Ipad, but it’s not always on my desk, or charged. Plus it’s heavy(ish) compared to this. And it’s big, the Mobiscribe is the size of a Kindle Paperwhite.

There are always Cons

For whatever reason they chose to not make any way for the stylus to attach. A little Amazon searching and I found a great solution to that odd oversight.

It’s an old Android version. 4.something. Hopefully they up that just for the OS benefits like improved security, etc. But not a deal breaker.

The calendar app is pointless because you don’t/can’t connect your actual cloud calendar to it, so you just jot appointments and such and they never sync outside the device, which is again, pointless. While I don’t want to check my mail or social accounts, being able to quickly make an appointment or see what’s coming up, would be nice.

The last “Con” as such is that you can’t customize the home screen. I’d hide books and calendar and just make it wake to the notes app all the time. One or two less taps. 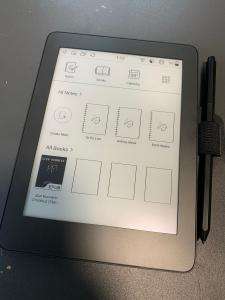 Perfect if you know what you want.

I want something I can (as best I can) remember to toss into a pocket and just have with me. I come up with plot ideas or business thoughts, on the go all the time. I hate typing on my phone, so never take notes there unless it’s “OMG THIS HAS TO BE CAPTURED” but I’ll grab this and jot something down fast.

Or just grab it and doodle what I see on the bus.

Want to see me live and in-person? I'm very personable and some say … END_OF_DOCUMENT_TOKEN_TO_BE_REPLACED