You are here: Home / community / My First Con(vention) Experience 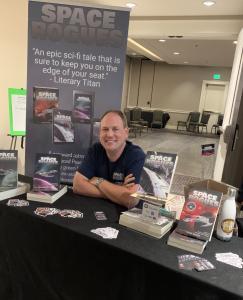 So this past weekend participated in MileHiCon. It was… Just ok. I don’t put any blame on the organizing team per se. It sounds like last year they went really big (50th Anniversary), and this year the programming chair took ill and ignored (Probably rightly if they were ill) email starting in April (Not sure why they didn’t say something sooner, shrug)

I had a 2 hour slot in the Author Co-Op, a shared table space next to Author’s Row. I also had a seat on a panel.

I ended up paying for an extra ticket (I bought a ticket for nicole and myself at the end of September) but that’s ok, it wasn’t a lot, and the volunteers didn’t seem to have a ton of information (even those assigned to the participant greenroom) so it wasn’t worth puzzling out with them. Or dealing with that puzzlement, as several seemed highly disinterested in being helpful. I don’t know if it’s normal for this Con or not, but the volunteers seemed to have little to no knowledge of, well, anything. How to check people in, how do deal with participants, etc.

We (My amazing and supportive wife came along) made sure to arrive an hour before my spot at the Co-op table. I met my (assumed) table mate, JT Evans, great guy. We chatted while the current occupants of the Co-Op packed up. Then we realized there were 5 of us there to set up.There were 4 spots. Oops.

About two weeks ago I got an email confirming the Co-Op stuff, there was a tiny screenshot image of the schedule, I was on it. The gist of the email was confirming participation, essentiially If you’re on this tiny image, you’re good to go. Or not as it turned out.

There’s a tripod sign with some kind of hand sign up for the open Co-Op spots and someone had written themselves in. Hence the problem. Thankfully one of the organizers came over and explained the illness and the wholly borked internal stuff she was dealing with, including a disconnect between the previous person, and the tools they were using to organize things. She very kindly found me a table. Upside, I had a whole table to myself. Downside I was at the end, alone and in front of a door to some type of kid’s activity room.

There is definitely a “Gravity” aspect to these things (I think. My sample is small right now). JT had been on a panel or two before our time slot and many people came by having seen him and bought books. The guy next to him, also sold a few books (He may have sold books no matter where he was, not trying to imply otherwise). I sold none, but did give out a few business cards to people interested in eBooks more than paper (Can’t blame them). I don’t know if I’d have sold any sitting next to JT or not, but since I wasn’t selling, I was watching :) He had by far the most visitors. He’s also been around and knew a lot of people so had lots of friends stopping by. People are drawn to crowds (Gravity, right?)

So that was a bit of a bust, but a great learning experience. I’m glad I wasn’t selected for the Author’s Row my first time out. That might have been a bit much for my first time out. I’d be curious how those folks did, since the four hours I was there, i never saw a crowd, ever. At best a trickle of a few people here and there.

I was selected for a panel on “Createspace, KDP and you” or something to that effect. Basically Self Publising 101. It was at 7pm. Next door was “How to write good sex scenes” and in the main area was the Cosplay parade. I had low expectations for turn out.

We actually had a not bad turn out. The room probably held maybe 30 and we had about 12 or so. Oh and the moderator was a no show.

The same email with my Co-Op spot on it, included a few PDFs one of which was a panels 101 kind of thing with the questions the moderators of other panels planned to ask their panelists, so everyone could be prepared. My panel wasn’t included. I didn’t think anything of it, figuring the moderator was going to wing it. In hindsight I’m guessing the moderator didn’t even know they were the moderator.

The panelists have all showed up, I shared the table with Jonathon Brazee, that was cool, he’s a great guy. No moderator. I don’t know if the time keeper reached out to an organizer or what, but at 7 he closed the door and kind of shrugged, “Guess it’s just you all” and sat down in the back row. The guy at the end, a small publisher, took the lead as moderator since the rest of us didn’t much care. He didn’t do a horrible job, but was very anti Amazon, which given the title of the panel was a bit surprising. I’m no fanboy, but still.

The panel went fine, some great questions from that side of the table, and great insights from our side of the table. I even gleaned a thing to try out :) The stand-in moderator did an admirable job.

It was a bummer it was a manel, I don’t know if the moderator was also a dude, but in their absence, manel for sure. I know it’s hard to avoid, but I’d have given my spot up in a blink to an non-dude. Ah well, not my circus, not my monkeys, as they say.

I’ll give MileHiCon another shot next year, the folks were all very nice, and the other authors were great. Nicole accompanied me and did some surveillance around the con and picked up that this year was a bit lackluster after last year. Less budget after the spend last year, and overall disorganization. I’m well aware of what goes into events, so am not holding this year against the team.

Want to see me live and in person? I'm very personable and some say … END_OF_DOCUMENT_TOKEN_TO_BE_REPLACED