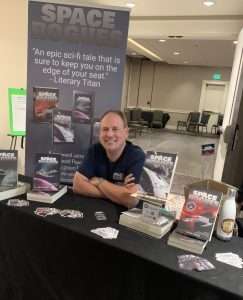 I decided around mid-year to start putting myself out there as an author, like in person, in front of other people, outside my house. On top of looking for opportunities, I said yes to any that came along.

A two-hour spot at MileHiCon (see here. They’re not written off, but close)

Three 2 hour blocks at the CO Country Christmas Gift Show at the Denver Merchandise Mart. This was via CAL Who had a large co-op booth.

A local Author happy hour at my local (and excellent) indie bookstore, BookBar.

It’s been a mixed bag to be sure. MileHiCon was a bust. But it was only for two hours. During Rocky Mtn Con, there were a few times where nothing happened in two hours. That said, Rocky Mtn Con was quite good. This year they didn’t do programming, just basically a merch hall. I don’t know if that’s a new ongoing thing or what. Given that it was only shopping, I was surprised and impressed by the crowds. There was rarely a time without dozens walking around the space.

I did get a panel at MileHiCon, which taught me; 1 be more aggressive in offering myself up to panels, and 2. don’t go in with expectations LOL. It was fun, though, and met some neat authors. 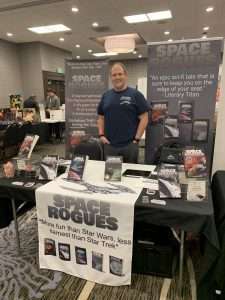 Me at Rocky Mtn Con

The Christmas Gift Show was the most interesting. For one thing, it was at the Merchandise Mart, which I’d never been in. It’s fucking huge. Also, the gun show was next door, so that made for some interesting customers. In all like 450 vendors, from books to pallet-wood painted like the CO flag and any number and manner of wooden stuff painted in a Christmas motif. I had time slots all three days (Fri, Sat, Sun) where I was at a table with my books, being social and talking to people. The idea is not only are we pushing our stuff but books in general. Some folks make a killing some don’t. I made enough to cover the cost of being there and then some, so I’ll be back or 2020.

The Local Author Author Happy Hour was a lark. Bookbar had Space Rogues 1 on consignment so it was cool to bring in friends to shop the bookstore and ideally pick up some copies of the book. It also lined up right before the quarterly SciFi-fantasy reading series a friend puts on. Saw lots of friends, sold some books. Drank lots of wine.

I’ll admit to having a bit of an advantage here. Running 360|Conferences the last 10 years has taught me how to stand around and smile and be pleasant and not be bummed when I’m ignored by a passerby that clearly saw me, but ignored me (We all do it at these things, else we’d own 100 hot tubs, and have new windows every year). While still not at all in my comfort zone, I’m much better about being out there than I think many authors (at least in the beginning).

That said, it’s still LOTS of smiling. Some folks prefer to stand the entire time. I tend to go back and forth. Standing when it’s busy, but sitting when it’s a person every 10-15 minutes. I don’t find vendors sitting to be off-putting, some folks think it’s weird/rude. They’ve likely never worked a booth for 8 hours a day for 3 days.

The other thing with the smiling is that you never know who might come back around. It’s an excellent icebreaker to recognize someone you smiled at as they walked past and be able to start a conversation around “I knew you’d be back” I did that a few times. Sometimes it leads to a sale.

Depending on the event and your commitment you might be stuck for hours holding down a booth, especially if it’s just you. Have a sign ready for “Be back” and bring snacks and water. I noticed a few folks at Rocky Mtn Con. ordering pizza and other grubhub’able things. I was ok with snacks for the most part. Regardless, be prepared. Hotel food is stupidly expensive and limited.

One thing I learned at Rocky Mtn Con. was to work while there. I was surrounded by artists, and between smiling and selling, they’d pull out their sketchpad and draw/doodle. So, I spent Saturday doing pretty much nothing. well, I mean smiling and chit-chatting, but nothing otherwise productive. So Sunday I brought my iPad keyboard and wrote. It’s not as cool looking at the person next to me drawing an awesome Deadpool riding a My Little Pony, but still, I managed to write almost 4k words. I might actually make a sign, “Writing in progress” or something so it’s clear I’m not just being an anti-social prick and that the “magic is happening right now”. The key is keeping your focus split so you can immediately engage someone that drifts into your attack radius. Don’t want to miss a possible sale.