You are here: Home / Books / Side Hustle Tango 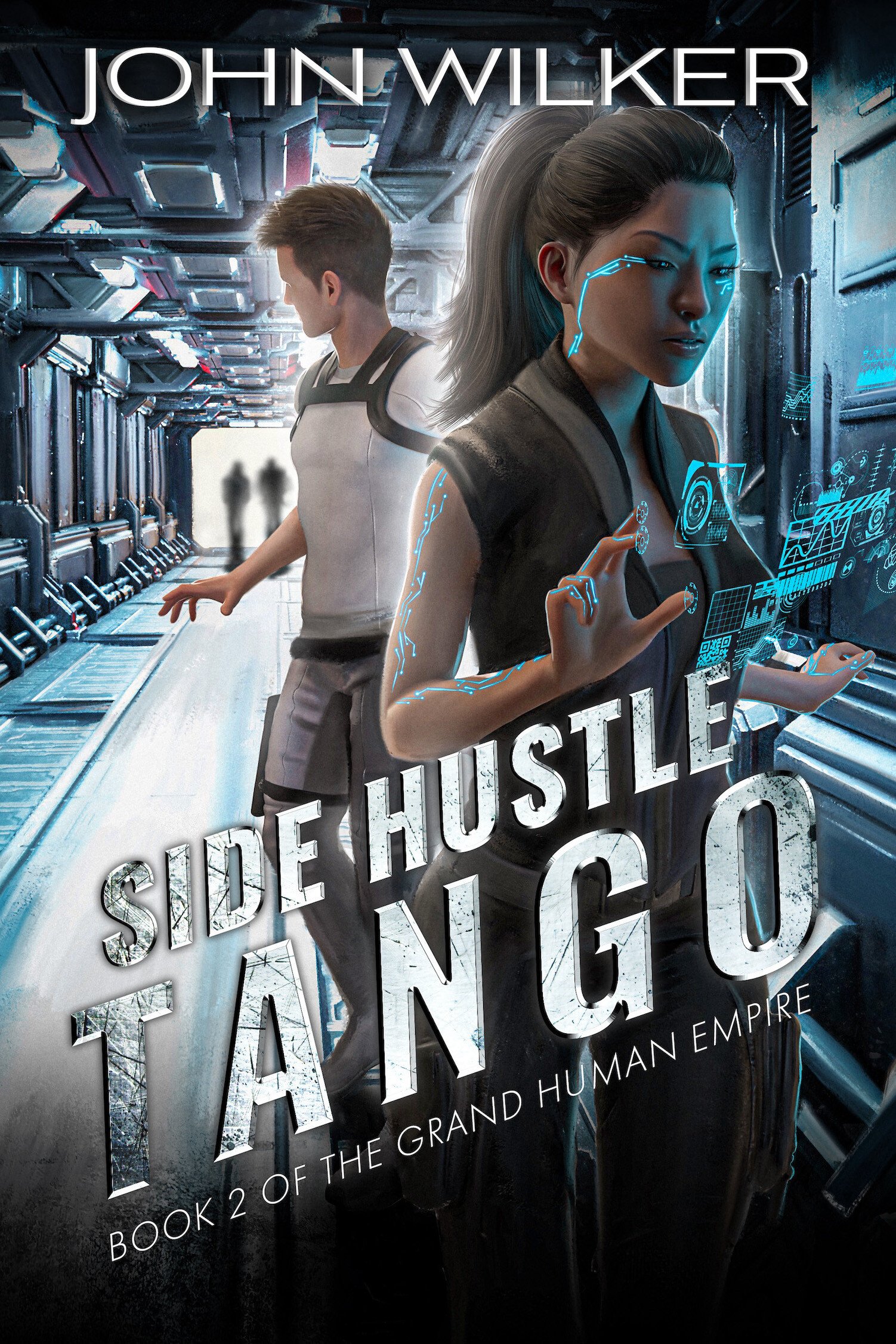 The Crimson Orchid hasn’t forgotten what Jax did to them on Jebidiah.

Everywhere he and Naomi turn, bespoke suited thugs are trying to kill them.

When the Governor of Kelso station hires them to take her to a summit on the Imperial homeworld of New Terra, it’s the kind of straightforward job Jax likes.

Naomi has other ideas.

One thing leads to another and now it’s not just the Crimson Orchid that is hot on their heels, but a mysterious Imperial agent.

“Of all the things to make it this far from Earth, TGI Fridays isn’t one I’d have bet on,” Jax said as their client approached. The well-dressed woman was threading her way between screaming children and flair-adorned servers. He watched as she side-stepped a toddler with ranch-covered hands.

Naomi nodded. “First time here.” Her often unwilling business partner looked at her, his mouth hanging open. She shrugged. “What? I didn’t really have a normal childhood, remember?” She held up her hands. Blue lines that traced her arms, neck, and face glowed. The bio-circuit tattoos faded as she looked around. “I kinda like it.” She watched a server zip past, balancing a tray of drinks in her hand, buttons and other trinkets jangling as she moved. “It’s fun.”

Jax raised a hand, patting the air. “Okay, okay, calm down. Maybe if you’re good, we can come back another time. I think there’s one of these at the Jericho station.” Their client had almost reached them, dodging a distracted father with an infant cradled in one arm and another child tethered by a leash that was straining. Jax reached into his jacket and retrieved a portable data storage device, placing it on the table.

“Mr. Caruso, Ms. Himura,” the well-dressed woman said, dropping into the open chair across the table from them, exhaling. “Welcome to Nuevo Santiago,” she said, likely with less enthusiasm than when she had entered the building.
“Lovely colony you have, Madame Governor,” Naomi replied.

Nuevo Santiago was one of the older pre-Empire colonies. Colonists from Chile and Argentina originally settled it during the early exodus from Earth. The government’s open immigration policy caused the population to boom quickly with people from all over Earth looking for a fresh start. The original settlers made sure new arrivals felt welcome and that they knew that the cultural center of the planet was South America.

If Jax remembered correctly, during the war, Nuevo Santiago had remained neutral. At least, as neutral as possible. Being a bit out of the way helped.

He smiled his best fake smile. “It is, great place.” He raised an eyebrow. “You have our payment?”

The governor, very much descended from the fairer-skinned settlers of the colony, nodded as she slid a hand into her purse. As she removed an anonymous credit stick from it, she looked at the data store sitting on the table. “That’s everything?”
She slid the credit stick across the table just as a server came over. “What can I get you folks?” The twenty-year-old’s smile looked like it was painted it on his face at the beginning of each shift. “Mozzarella sticks are half off for another hour,” he offered.

Jax looked up. “Two…” He tapped his chin. “Sagerstown Ambers.” He looked at the governor, eyebrow raised.

“Nothing for me,” she said, doing her best to avoid eye contact with the server, likely hoping he didn’t recognize her.
The server nodded and headed off, stopping when Naomi shouted, “You know what, throw in some mozzarella sticks.” The young man turned, his smile still in place, and inclined his head before continuing away from them.

Jax reached for the credit stick as Naomi slid the data storage device toward the governor. The small device could hold terabytes of data on specially designed crystalline nano-wafers. Status lights on the leading edge of the rectangular device blinked to show device health.

Unbeknownst to the three of them, as they were trading goods for payment, three well-dressed men and a woman walked in, taking seats in the bar. They were way too well dressed to be Friday’s patrons. The bar was between the main dining area and the door, and was full of football fans in varying degrees of fan regalia. When the bartender walked over, one of the men waved him away, scowling.

Jax held the onetime use credit stick up to his gPhone. The two devices detected each other via lower power local networking. After handshaking, the two devices linked, and his banking app showed the amount of money contained on the onetime stick. A blinking button let Jax know he could transfer the funds to his primary account. He tapped the button, then dropped the now empty credit stick in his half empty glass of water. The governor and Naomi watched the entire process quietly.

The governor was doing something similar at her end of the table, accessing the data storage unit from her own gPhone. The status lights on the unit blinked as the governor verified the data.

“Here you go.” The server was back, a tray balanced in one hand. He deposited a frosted mug in front of first Naomi, then Jax, placing a basket of steaming breaded cheese in the center of the table. “Careful, those are hot,” he said as he placed three plates and napkins on the table.

When the server moved on, the governor exhaled. “This place is exhausting.” She gestured to the storage device. “This is incredible. With this, we’ll be able to put Jellico away for a long time.” She nodded to each of them. “Thank you.”

Jax sipped his beer, then said, “That’s outstanding. Glad we could help.”

Naomi smiled. “From what you told, that’s good news.”

The governor nodded, and after looking around, said, “Okay, then we’re done here.” She stood up, smoothed her blazer, and plucked a mozzarella stick from the basket. “Safe travels.” She turned and almost collided with a woman chasing a shouting child. She shook her head and walked away.

Jax looked at Naomi, holding his mug up. When she clinked hers against his, he said, “To getting paid.”

As Naomi popped a mozzarella stick in her mouth, someone behind them said, “Hello, Mr. Caruso.”

Want to see me live and in person? I'm very personable and some say … END_OF_DOCUMENT_TOKEN_TO_BE_REPLACED