This isn’t a ‘help others’ post, so much as it’s a ‘help me’ post. By that I mean if I can get your in and out of the airport faster and more efficiently, well that helps me!  Travel season is rapidly approaching, and in fact I’m traveling soon. I thought I’d share some tips for making travel out of DIA easier. For you, and not very indirectly and more importantly, for me. You see, your not knowing what to do  and how to do it, messes with me and my travels.

Travel sucks, it really does. The TSA has made it absolutely miserable to go between two places in our country. BUT you can try to make it as painless as possible.

So here we go, a few helpful tidbits to help you (and me) get through security and on your way.

OK that’s all I’ve got for ya, it should at least help you get through security and out of my way as efficiently as possible. I hope ;)

See you at DIA.

This blog post has been sponsored by CLEAR, the service that speeds you through airport security. CLEAR members save so much time at the airport, it’s like having Daylight Savings every time you travel! CLEAR, the (self-proclaimed) Official Sponsor of Daylight Saving Time, is celebrating the extra hour we get on Nov 6th with a series of travel and time-savings posts on their blog – and here, on my blog too.

To help you see what CLEAR is all about, they are offering my readers a special 3-month FREE trial! Don’t settle for just one extra hour this Daylight Savings. No need to deal with unpredictable security lines, the stress of rushing to your gate, or the time you waste getting to DEN extra early. Click here to get your pass and try CLEAR’s enhanced travel experience for yourself. Just enter my code (CMNDST12) in the promo code field on the payment page.

I see this on twitter, and in real life face-to-face conversations a lot, “blah blah, working on something awesome, super super busy” or some other fairly douchey version of that sentence. Typically said by the same people over and over, as if saying something like that makes you cool, as if repeating it somehow makes you cooler. Maybe being busier than the rest of us makes you feel better? Hate to break it to you but you’re not busier than us.

I have something to share with you ‘busy’ people. We’re all busy, just some of us are busy doing shit instead of just saying it. Shut your pie hole, and get shit done!

I’m sure it’s a ‘for lack of more interesting things to say’ type of problem, but really if you’ve got time in your startup or whatever to tweet about being busy… you’re doing it wrong. Run your damn business, stop telling us about it.

I have no respect for people who say (or tweet) that type of thing. As if running 360|Conferences, Cocoa Magazine, and everything else I do, didn’t keep me busy, you don’t see me telling anyone who’ll listen how many hours a day I put in, what time I get up or go to bed, etc.

It’s simple, when you think to yourself, “Oh I should tweet some cryptic tweet about how awesome I am because I’m really busy, and that will make people think i’m even cooler…. STOP don’t do it, take 30 seconds… breathe, then get back to work.

Hope everyone takes a few minutes, updates your CSS, and takes a day to not take ourselves so seriously! 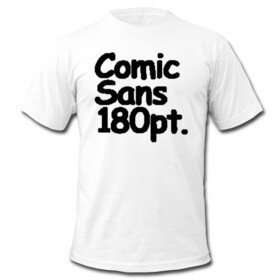 Last year several folks updated the CSS for their blogs to participate in National Comic Sans Day. I’m hoping more will do it this year!

Why? You ask. That easy, we take ourselves too seriously. If folks directed their Anti Comic Sans energy into something productive, we’d probably have cures for Cancer and the Common Cold. And really it’s just a font. And it’s just one day.

We need to lighten up, laugh at ourselves, and take a day to have some fun at our own expense.

Do it, you know you want to! It’s simple, just create a second style sheet  of all comic sans and drop it in on Friday. Take it out Saturday morning.

I’ve been using the internet since just after it was born. Yeah I’m that old… and my highschool was lucky enough to have a NeXT workstation in every classroom, 8 in the library, plus a mathlab, and my personal kingdom, the student government/yearbook office, which had 4, including a color station :)

Anyhoo. history aside, I was struck the other day at a MHSMC meeting that social media is the new ‘internet’. Mainly this relates to my love of all things Cluetrain Manifesto

. One of the  of the primary things I took away from Cluetrain in my first reading as a lowly Software developer at a mortgage company where marketing outnumbered IT (as well as my many subsequent readings), was that it’s important, and beneficial for enterprises to let their people be people. Lower the walls, don’t raise them. I thought we were making progress here.

It seems that social media is moving away from that if MHSMC is any indicator. The presentation this month was on Corporate use of Social Media.

One of the panelists, I don’t remember whom I’m afraid, made an example of what to her (and many in the audience it appeared) was a social media gaff. A call center employee somewhere in a state most of us don’t care about commented on a blog post. The post was critical of the complany and this person came to the defense saying not much more than ‘we’re working hard for you in Toledo Ohio’ (I don’t recall the city honestly).

I was in the back row cheering on Timmy from call center X in Toledo. I mean how lucky is that company that an employee at that level stood up for his employer with nothing more than “We’re working hard.” To the best of my recall the panelist didn’t say Timmy made promises or claims, or anything that could in any way be said to hurt his employer, just that he and his fellow employees were working hard. How awesome is that, every company should have passionate people speaking plainly without motive, on their behalf.

The panelists went on to relate similar stories, and reinforce that not just anyone could use twitter. That some people weren’t on the company twitter account, and wouldn’t be. That specific people followed specific guidelines in order to be the ‘voice of the company’. That without rules and regulations on what is and isn’t ok, social media was some sort of no man’s land of ROUSs.

I sat in the back row thinking, “wow, it’s like 1998 again”. Companies are back to being afraid of the internet, this time social media, and rather than embrace it, they’re locking it down, restricting who can say what, how.

it was sobering to see that as much as things change, some things stay the same. I wish I had had time to process what I was seeing then, I might have asked if anyone in that room had ever heard of or read the Cluetrain Manifesto

. I wish I still had a box of them I’d bring them to the next meeting.

The nonconformist in me hates lists for the simple reason that everyone else is ga ga over them. ditto for google wave.

But for lists there’s a bigger reason, and Chris Brogan hits the nail on the head, They’re exclusionary. They’re the new “hottest kid in school” list posted in the locker bay. Those on it feel more self important, and those not on it, feel like less than people, and in the end, they’re completely meaningless and 100% arbitrary.

Lists aren’t opt in or opt out, they’re not merit based, or anything like that. They’re lists of people that some one else thinks are worth listing. You must ask to be on the list, you must be “approved”, and if the list maker decides you’re not worthy, that’s that.

Lists are are for clique making. “Hey I’m on 30 lists” as if that somehow indicates importance. I see the number of lists a person is on, being the new “follower count”, a metric few care about, and most deride as a sign of being some sort of twitter spammer, or twitter whore.

Will it become the same bad juju if you’re on 50 lists, and have made none?

Of all the things twitter could of released, it’s sad they chose lists. They’ve already got their “most influential user” list or whatever. I’d rather see twitter add more useful features than popularity contests. To name a few. Polls, photo/video/audio (sorry third parties), maybe a suggestion system like Netflix? “You should look at these guys, because they’re similar to this guy that you follow.” That’d be WAY more valuable than “Here’s my bestest friends, who are cooler than you, but you should follow” list, by someone whom I’m not sure I care about their opinion on such things.

Sorry list makers, and list whores. I won’t be making lists, nor will I care if I’m on yours. There’s more important things out there.

Want to see me live and in person? I'm very personable and some say … END_OF_DOCUMENT_TOKEN_TO_BE_REPLACED