No, I’m not getting rid of it, it cost way too much. I am extremely disappointed in Apple though. I’ve not had a machine with these issues in a long time (Looking at you 2011 Macbook Pro with crap GPU). According to iFixit, it looked like the BT module is integrated, so no hope of replacing it with a better one (Which a user shouldn’t have to do).

I’ve been running a lot of test events leading up to 360|AnDev (later this week), 360|iDev next month, and then Chicago Roboto the month after.

I dug out an old pair of (extremely high quality, minor plus) in ear monitors. Wired.

I’ve plugged my magic keyboard and trackpad in.

All because the Bluetooth on this Mini is nearly unusable.

Last Friday during our final 360|AnDev one shot, i had my Airpods Pro in, everything was working, they were the only BT device. The connection dropped, which the system responded to by pausing the video that was playing. The video I was streaming to two dozen attendees.

How this device (I assume they all suffer it) made it out of QA I can’t fathom.

Don’t get me started on the fact that even under normal usage load the top of the device is too hot to touch.

If asked, I couldn’t recommend the current generation Mac Mini. :(

I’ve had some form of writing app installed on my mac or iPad pretty much forever (which isn’t as long for the iPad of course). Whether that was Word, Scrivener, Ulysses, copywrite, Storyist, Pages, or any other app that someone released to ‘revolutionize writing.’ Back when I was first working at Spire Digital I had an old white MacBook that I used for an online writing class I was taking, and worked on various short stories.

I’ve Always had an eye out for the latest and greatest but also the most useful. Finding something that fits isn’t easy.

For me, the big things are these; ease of use, portability, reliability.

It’s all too common for app developers to start throwing feature after feature into an app. “Hey what if it also had a todo list?” Those are great, I have an app for that, and don’t want it in my writing app. You get my point here, more isn’t better and so many apps get bogged down in features, just sitting down to write is a chore. Scrivener teeters on the edge of this. It’s feature packed but only takes 2 clicks to start a writing project.

This is a big one for me. When I travel I have some combination of Mac and iPad. Rarely do I not travel without my iPad, but sometimes I do travel without my laptop. My most recent trip to Munich was laptop free. Not to mention short trips around town when I just grab my iPad and go. That being the case, being able to use whichever device is closest to me to write, is a big deal. I intentionally left my iPhone out of the mix because I’m not a sadist.

Being able to open my iPad and have my writing projects update from the cloud is awesome. I can open Scrivener and get to work right away. I can load Dabble in my browser (or the app on mac) and see what I need to know for my next chapter or scene.

‘ during NaNoWriMo was written at home on the couch on my Mac and in coffee shops on my iPad.

This one is a bit vague, but for me, it’s two things; app updates and general not-crashyness. Has your app been updated in the last 6 months? Have you released a new major version? While I’d love super-frequent updates, I understand that’s not really feasible for most developers. But if you haven’t updated your app in a year? Two years? That doesn’t make me want to give your app my time, or you my money. In looking back to make the list of apps at the top, one of them likely hasn’t been updated in 10-15 years. It’s minimum required OS is Mac OS 10.3, released in 2003. It’s still available for download and sale.

Not crashing is kind of a big deal. Whether that’s full-on App crash or (to me even worse) backend stuff going bonkers like sync, it’s no bueno. If I can’t trust your app one hundred percent with my work, I can’t trust it at all. It comes down to “fool me once, shame on you. Fool me twice, shame on me” I’ve lost writing before to crashes that happen before an auto-save, or to sync conflicts, and that’s too maddening to deal with.

Are you a writer? What do you use? Love? What app can you not live with? 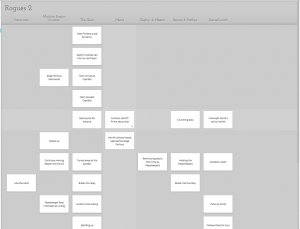 Every year for the last ten years I’ve at least done something. Some years it’s been open the site, be too busy to dedicate myself to writing, and close the site. Some years I’ve started writing, either something new, or picked up something I’d started randomly in the year. I’d get various amounts of words in, miss a day, then two, then four then I’d see that I was so far behind the average per day needed to win, I’d give up. Ten Years.

This year, my friend Tom and I both decided we’d do it again, both agreed to give it our all. I was especially motivated because a few months before Tom had shared a manuscript he wrote some 15 odd years before, and after reading it, I was more energized to create my own. 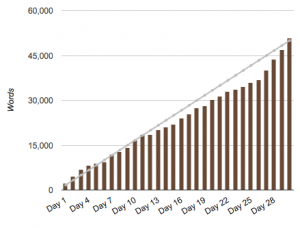 I don’t know what was different this year, other than being a bit lighter than usual on “stuff to do” work wise. But I was able to start strong, and even when I fell behind a few times, it was never so much so that it became impossible.

I actually thought I’d crush it over thanksgiving, but did the exact opposite, then when I was in the final week, the little author dashboard on the NaNoWriMo site was like at this pace you’ll finish on Dec. 2. “SO CLOSE” So I made time, and pushed through. I crossed the “finish” line around noonish on the last day.

I think one factor of the win was that I finally found an app I enjoyed using to write. I’ve tried most every app out there aimed at authors, and haven’t loved any. Some of come close, some haven’t, some have simply gone away. Scrivener, is here to stay, the iPad app is great for when I wanted to try to add a few more words but didn’t have my laptop, the Mac app is fairly intuitive to use.

Until the last week, I wasn’t sure I’d finish on time or finish at all. I have to say I’m pretty darned pleased with myself. My plan is to let it sit a week or two, then go back over the story with an eye for cleaning things up. Then anyone who’s interested may read it (warning it’s Sci Fi). Then Maybe I’ll toss it up on Amazon. Who knows.

With HomeKit finally being pretty robust, and widely supported I’ve slowly started adding automation to the house. It started with replacing our Nest with an Ecobee, which has been awesome! Then recently I added a iDevices Outdoor Switch

to the rooftop. We’ve got some nice patio lighting up there, that I hate plugging and unplugging. I used to just leave it on all the time, which is kinda wasteful during the day, but easier then going over to the plug and fiddling with the cover to turn it all on, etc. (yes, laziness rules the day) 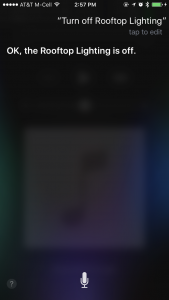 With the Outdoor Switch not only can I just tell Siri to turn on or off the ‘rooftop lighting’, but also now the lights are on a schedule; sundown, on, 10pm off. Definitely makes it easy and more energy efficient.

The setup wasn’t super smooth. There’s an app from iDevices you use to get everything connected, and that’s a bit finicky. You have to make sure the device is in wifi range, the phone is on the wifi you want to connect (2.4gHz only of course) etc. but once set up, it’s pretty straight forward, and then you can just use the Home app in iOS 10.

I changed my wifi password and that caused some havoc. About an hour later and many many cryptic errors, i was able to reconnect the switch. I basically (YMMV) had to completely remove it from my “home” and erase it’s existence, then fuss with the iDevices app a few times to get it back to connected, then all was good. I’m not sure there’s a better way than that either, which is a bummer.

If you’re looking to upgrade your outdoor lighting controls, etc, especially with holiday light season coming, I can’t recommend the iDevices switch any more highly! Set up hurdles aside once it’s set up, it’s great and reliable.

As a kid I love Swatch

Watches. I only had one, but had many Swatch Guards to add some color.  As I got older I could afford a few more, and did. I have a thing for watches, I love them. 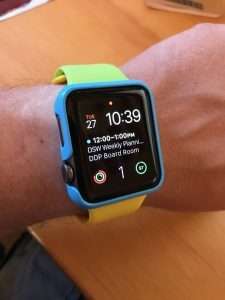 Then I got an Apple Watch

and at first just had one or two bands. Apple sells theirs for honestly a ridiculous Apple price, however Amazon has plenty of non Apple bands to choose from, in far more colors than Apple offers. It went down hill quickly :)

On the weekends I have a nice leather cuff band I wear with my watch. It looks nice, and feels great. But during the week, especially with working out in the mornings or at lunch, I wear the sport bands. 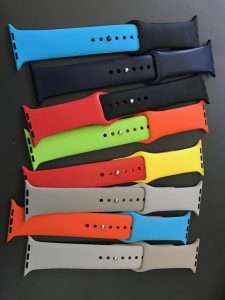 Then it dawned on me, I have so many bands for my Apple Watch, why not mix and match them? From there I also found these nice little Protective Bumpers

in awesome colors, and
boom, my love of Swatches and having a unique piece of kit was reborn!

I’ve gotten tons of compliments on the whimsy my watch bands show, which is fun.

Want to see me live and in-person? I'm very personable and some say … END_OF_DOCUMENT_TOKEN_TO_BE_REPLACED