I figure as a downtown dweller I have a moderately unique point of view on this. I walk a lot. In the colder months, though it takes longer it’s more comfortable than riding. In the warmer months I ride my bike everywhere. All over downtown. When i leave downtown I drive.

Just last night a drive nearly killed me so he could pull into the parking lot for the rockies game. I was right there, he passed me, then cut me off. As a driver, I’ve had to swerve as I come around a blind corner to face bicyclists who don’t grasp what “shoulder” means and ride in the center of the road. As a pedestrian I’ve been nearly run down on more than one occasion by bikers on the sidewalk. Conversely I’ve been “That” biker 2x. Both in cases where cars parked on the side of the road blocked my view and I thought it was clear to pull out, when it wasn’t. It goes both ways and I get that.

I had heard that DPD was cracking down on sidewalk riding, which in general I completely agree with. The problem, as mentioned in this examiner piece is that the three groups can’t get along. I take to the sidewalks in extreme cases, when the road isn’t wide enough for me to feel safe with the cars. I ride slowly, and try to not disturb the peds.

Jake and I were talking about this a bit a while back, that even when we’re driving, we’re more aware than most drivers we see. Because we’re used to being aware. On our bikes is a true safety matter to know what’s going on around you.

I think Denver is doing an awesome job of making the city more and more bike friendly. New bike lanes north of Broadway are great steps in that direction! I hope motorists try to think a little outside the box though, and I equally hope bikers try to not be so douchey. Yeah as a whole I despise most other bikers.

If everyone followed the rules a bit more I think all three groups could share the city with fewer problems.

So what happens when you enter your garage forgetting you have a bike on top of your car? 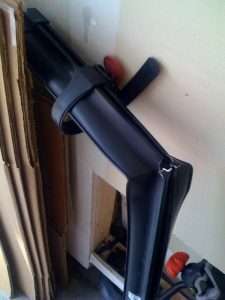 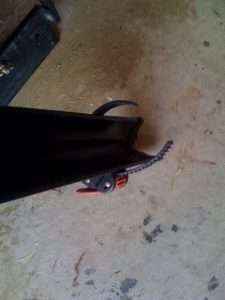 Luckily the bike, unharmed. Which woulda sucked, since it was Nicole’s replacement bike that we bought at the police auction, and had essentially just finished getting into tip top shape for her to ride.

It’s interesting that the plastic tire strap snapped and the rail itself (pic one) bent until failure, and the grabber arm, that you tighten on to the bike’s frame, actually let go. I presume that’s by design, and I’m very pleased to only have to buy a new bike rack vs a new bike.

The car faired well too, only a slight gouge on teh roof, from the pedal as the bike collapsed on to the roof.

Needless to say, Nicole and I will not be so engrossed in a conversation that close to home after being out with a bike.

Want to see me live and in-person? I'm very personable and some say … END_OF_DOCUMENT_TOKEN_TO_BE_REPLACED