So, the main reason I pulled the trigger on getting this doorbell is that our previous one (a Zmodo) was literally falling apart. I don’t know if it was age, sun or aggressive button pressing, but the button was half gone.

Yobi is the first (maybe second, but first for consumers) Homekit enabled doorbell (as advertised during WWDC ’20).

When you’re on the bleeding edge, getting cut is a likelihood. The Zmodo had a clever install. You installed and connected your doorbell wiring to a plate. The actual hardware slid on and locked down with a screw.

Yobi ain’t got time for that!

They Yobi comes with an ugly gold frame. You connect your wiring directly to the device. The frame leaves zero room for wiring. I guess Yobi assumes you have plenty of doorbell wiring that you can pull out to make use of, but that is easily shoved back inside.

Try as I might, I couldn’t get my not long wiring to connect to the device and shove back inside. Yobi provides some wire extenders which help, a little.

If you plan to go this route, get your own screws. This is the screw they give you, the head is so small it passes right through the slot it’s meant to hold your device to the wall through. Who thought this screw made sense? Oh and it’s such a shitty and soft metal, you’re likely to strip the head putting the screw in. One and done.

Thankfully I have quite the collection of random screws from other projects.

Once you get past the pretty janky install, connecting this thing to your network, and Homekit Home, is actually really easy, Sorta.

They put the homekit code on the back of the device. Nowhere else, not in the documentation, anywhere. Likely depending on your wiring, the device is on, when shoved into the frame.

Thankfully the iPhone camera is good and I could capture the code from severe angle.

Once you get past that, it’s actually really easy. Kudos to Yobi here, adding to HomeKit once scanned took one shot. I’ve had other gear that took a half dozen attempts.

I’d ditch the gold. I’d include usable hardware. If possible, I’d make the frame either have room for wires, or have the wiring attach to the frame.

Once I have more time, I’m going to have to take mine off the wall and tighten up the install, which I don’t relish.

That said, it’s nice to have one less app, and to have my doorbell in HomeKit. I assume once iOS 14 is released to the public, the whole “Homepod announce doorbell” thing will work.

Ok, so I’ve been using the Omna for a while now and wanted to update my review. I decided to not post a second one, but just update this one, so the original is below.

Overall I’m still happy with my two Omna cameras. There are however some issues that kinda suck. Namely the SD recording function. Specifically, it’s unreliable at best.

Example; I leave the house for a showing (we’re selling). My lock tells me the realtor has arrived. Some time later my lock tells me they’ve left. I take a peak at the camera to see if they walked around and liked the house or walked in and right back out. No recording. The camera captured me leaving, then captured me coming back home, but somehow never once captured what happened in between.

I still like the Omna overall, but it’s functions as a security camera are pathetic and I hope D-Link does something about it. I certainly won’t be adding any more Omna to my Homekit set up until this is addressed

So I’ve been keeping on eye on the HomeKit field since Apple announced it. Seeing what devices and manufacturers were launching. One of the things I’ve been waiting for is home security/monitoring. Finally, the D-Link Omna is out. 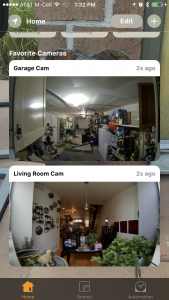 I immediately bought two. I still need an outdoor camera solution, sadly the one I have isn’t homekit friendly, nor is the app that I use to monitor it. However, the Omna is NOT an outdoor camera. You could put it in a window looking out, but I’ve never had good results with that since the moment the IR lights kick in, they reflect off the window back into the camera.

So, that said, I have now addressed my “Did I leave the garage open?” problem. Usually, it’s right after leaving and I just do a quick loop through our alley, but sometimes it hits me farther from home, or as happened most recently, “Did I leave that soldering iron on?”

The main need I had for in-house cameras wasn’t to watch the house as much as detect motion and capture it when not home. That’s why the Living Room Cam is at the far end of the house. I don’t need to see Nicole and I watching TV in full HD, but when not home, want to see if anyone is moving around who shouldn’t be. i.e. someone tall enough to be seen, and not my dogs. I think it’ll be a killer feature to set a rule like “When I’m not home, if the front door opens, start recording and alert me” Thanks to the Schlage smart lock which is also HomeKit capable, that’s possible (ish, depending on Apple’s automation piece).

Setup Is easy, HomeKit tech may have a semi-premium price tag, but set up alone makes up for it. From the Omna app, you add your camera(s). The app gets them on the network, adds them to your HomeKit “Home” in the room you want. 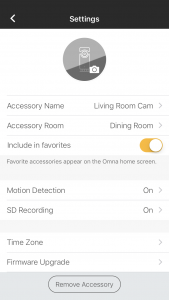 Once that’s done, you really don’t use their app much. THere’s a few settings you set, but after that, short of checking for firmware updates, there’s no need for the app (Into the ‘Home’ folder you go)

The motion capture is pretty basic, which I hope is just a rev 1.0 thing. Once you add an SD card you’re able to configure recording thresholds, capture areas, etc. You can’t view the captured video in the Home app, so you need to keep the Omna app around for that. You also can’t control motion detection triggers in the Home app automation section.

Ideally I’d like to set up capture rules around capture when I’m not home, or certain times of day, etc. I don’ need my Home to turn on lights when there’s motion in the garage at noon, and it’s me, but at midnight that might not be a bad thing, whether I’m home or not. Like I said, hopefully this is just a rev 1.0 thing.

The cameras support two-way audio, though other than spooking Nicole I can’t imagine a use. I’m sure if I talked to the dogs, they’d lose their minds and destroy something looking for us. I’m sure it’s a handy feature, but not one I really care about. 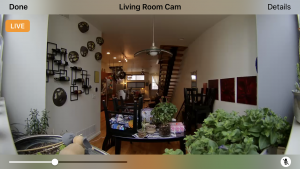 The Wide angle lens is really as it gives you a more or less full view of the space. As I play with these cameras, I may experiment with putting them in the middle of our rather long townhouse floor, to see if I can still capture the entire space.

Overall so far I’m really happy, but for the most part, if I never have to look at them, that’s good, since that means someone or something set them off when I wasn’t around, LOL.

As more and more devices are released (This seems like a big year for HomeKit based on the last CES) the HomeKit ecosystem will get more and more awesome. I hope Apple keeps up with improving the base HomeKit app/API so users can get creative with the automation tools.

Want to see me live and in person? I'm very personable and some say … END_OF_DOCUMENT_TOKEN_TO_BE_REPLACED