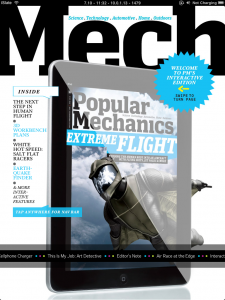 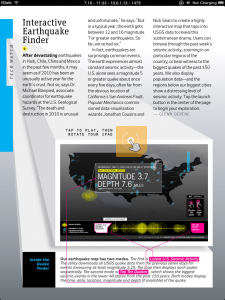 One of my biggest complaints with the iPad is it’s complete lack of usefulness for content creators. I understand, creators are not Apple’s biggest market, or even a group the ever seem to care about, Shoot, they make “Consumer electronics” LOL.

Still there’s so little that would have to be done to make the iPad SO incredibly awesome for creators, and open doors left and right. I know it’s possible, iThoughtsHD (iTunes Link), a great mind mapping app has already done it! 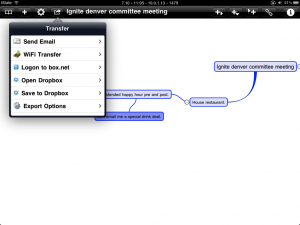 When building a mind map, like many tools on the iPad, you can save off to the cloud somewhere, box.net, dropbox,etc. Unlike many apps, and all Apple apps. You can load from cloud.

It’s that easy. They did why didn’t/hasn’t Apple?

I caved, and paid $10 for Pages. Complete waste of money. I edit a lot of pages files. Sponsor packets,etc. All the time. I’d love to pull one up on my iPad, edit, and without having to think about plugging into iTunes, copying the files out of iTunes back to my iDisk where they live, overwriting the old one.

Pages, and most apps, come kinda close, you can access the file, pull it in locally, make edits, but then you’re stuck, the document is trapped in the iPad and iTunes.

Why not make the iPad apps (at least the Apple ones) more connected to Oh I dunno, say Apple’s own cloud services. iWork.com and mobileMe. Some of us (still) pay for mobileMe hoping it’ll mature and actually be useful. I have no idea what iWork.com is for, but it seems like it’d make perfect sense to tie the iWork iPad apps (maybe the new iLife ones too) to Apple’s own (though dropbox, et. al. would be nice too) services to extend their usefulness.

Please Apple here my plea! The iPad is great for games and consumer shit, hook those of us who create up! It can’t be hard, a third party did it! You can too!

When I heard the announcement, my first thought was, “ok this is the final nail in Cable’s coffin for our house”

Very quickly though the coffin shrugged the nail off.

What would make hulu + the killer app for me? Not a lot above what they’re offering, but enough that I’ll be waiting before switching our family over.

1. The Archive. That’s a nice feature. Nicole decided to watch Angel, yet currently hulu only has like 1 season, or part of 1 season. So when we find programs we’d like to explore from the beginning, the archive is a good option, assuming the show is in there.

2. We watch a lot of Discovery and History channel, which don’t seem to be available on hulu. Bummer, will have to wait and see if they get that content or if there’s another avenue for it’s consumption.

3. iPad and iPhone apps are awesome (and the quality is insane!), but much like the Netflix app, when I’m in the mood to use those apps is when I’m traveling. hulu and Netflix really should allow the apps to cache content. It’s all DRM protected by the apps, etc, so caching shouldn’t be an issue. Putting in hard restrictions shouldn’t be hard either, like 3 shows, for 2 days, etc. Frankly when I’m at home wanting to watch something I have a really big TV with Netflix and hulu on it, I’m not reaching for my iPad.

Sure if I’m in a hotel room, I could stream content and watch on my iPad, and that’s a valid example and a use I’d likely engage in, but for me, and I assume a lot of other travelers, the bigger need is in the air. Unfortunately I don’t see Frontier adding in flight wifi anytime soon, and when they do it’ll be too expensive. Plus if Wil‘s experience is an indicator, as more and more people start to stream content, inflight wifi is likely to break down. I suspect it’s not that fat of a pipe to begin with.

4. This is kind of a “good to have” it sounds as if hulu plus doesn’t reduce the number of ads I have to see. Don’t get me wrong, i pay for cable, and without TiVo I’d see far more ads than on hulu, but it feels weird to move to a premium model, and not at least reduce the number of ads + users will see. Shoot, just go from 3-4 to 2-3 during a show. Something to make me feel like my $10 is buying something more than archive access.

I think the reason hulu + wasn’t a home run for me is because we’re fairly casual watchers. Access to the archive, while nice isn’t huge for us. We have a small number of shows we watch on hulu and we’re pretty good at watching them before they expire. The lack of caching content for air travel, or say, camping or other off the grid activities, makes hulu + even less interesting. I have a ton of content in the “videos” app on my iPad, it’s available whenever, whereever. hulu + didn’t come close enough to beating that for me.

I hope as they roll the service out, they add some features. I really do want to support hulu and stop paying for cable service, but that doesn’t appear to be today.

So I’m writing this on my iPad. I’m not feeling the magic. (update, i had to save it so I could edit on my Macbook, else this post take would’ve taken 40 years to write)

Don’t get me wrong, it’s pretty, but not useful. Yet.

And before you decide I’m just an Apple hater, let me lay out my credentials for those that don’t know me.

That out of the way.

The iPad is a very pretty device, and if your life (as some do) revolves around reading websites, watching videos, and …. well that’s it. Checking email I suppose too. Then the iPad is the perfect toy for you (albeit, for those simple tasks, the price IMO is a bit steep).

I tried. I didn’t write this review the night i got my iPad, I didn’t write it Sunday night, I waited and actually tried to do things I’d normally grab my Macbook for.

First I went up on my deck, to get some sun, and enjoy working outside. Since I was just gonna reply to a few emails, I grabbed the iPad.

Last night I went to a user group meeting, taking only my Mifi and my iPad.

Yeah Apple is about the experience, I agree, and sure surfing the web is very nice, if you only want to surf the web and consume. If you actually want to create… well so far the iPad hasn’t done much to support creation. I read one review that gushed and gushed about how awesome surfing the web is. OK sure, but I don’t spend my day complaining about surfing the web now.

What don’t I like? (and please, you don’t have to agree, I welcome your opinion, but if Apple makes you happy with what they deliver, don’t try to tell me what I should be happy too)

I was reading My friend Steve’s post over at TUAW on the subject and most of his reasons (most of them) resonated with me. Enough so that I wanted to go into more details on my own.

So those are my reasons for ordering an iPad. As a consumer, it’s not a very interesting device. I’m not gonna spend whatever Apple asks for iWork, because that’s stupid. I’m not gonna work on spread sheets, or keynotes without a keyboard. Sorry I don’t see that working out well. Maybe I’m wrong, but I doubt it. As 1. an iDevice conference organizer it makes sense I know what my customers are playing with, and 2. as a hacker wannabe, I can’t wait to see what it’s truly capable of.

I don’t think it’s worth waiting an extra month, paying more money (AND then paying $30/month for actual 3G) just to have an always (except that AT&T fails so often it’s more like 80% of the time) connected device.

Want to see me live and in-person? I'm very personable and some say … END_OF_DOCUMENT_TOKEN_TO_BE_REPLACED